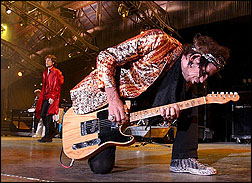 (CelebrityAccess News Service) — The 2004 Rock Rich List is compiled by Rolling Stone magazine. It gathers information from record company executives, managers, lawyers, agents and publicists along with figures from SoundScan, Pollstar, RIAA, Amusement Business/Billboard, The Yellow Pages of Rock and ArtistDirect. The list is an estimate of the net figures of what the artists earn after recording expenses have been deducted and after managers, agents and lawyers have taken their cuts. Surprisingly, merchandising and endorsement deals are not included.

PALM BEACH, Fla. (AP) — Singer Beyonce's band came to the aid of a 91-year-old driver, chasing and holding down a suspected carjacker.

Police said Reynold Caleen, a great-grandfather of nine, tried to fight off a knife-wielding suspect when he grabbed the elderly man's wallet in the parking lot of a Walgreen's store Tuesday — knocking the suspect's knife out of his hands and kicking him several times as the pair wrestled to the ground.

Lead guitarist Shaun Carrington, bass guitarist Kern Brantley and drummer Nisan Stewart, in town to rehearse for a tour with the singer, pulled in front of the suspected carjacker as he tried to drive the elderly man's car out of the parking lot — and chased him on foot when he got out and ran.

A Walgreen's employee tackled the suspect; the bandmates held him down until police arrived. "Gotta protect society as much as we can, you know?" Stewart told WSVN-TV.

"We're more of the John Wayne generation," she said.

The suspect was charged with armed carjacking and battery of a person over 65, a felony in Florida.

NEW YORK (AP) — After 10 years in musical seclusion due to family turmoil, Anita Baker is returning to the spotlight.

The Grammy-winning R&B songstress has signed a deal with Blue Note Records to produce at least two albums, and expects to release her first project before the end of the year.

"I'm so excited," the singer told The Associated Press in an interview on Wednesday. "I do see that there is a demand for what I do, and my fans are still there."

With a deep, sensuous voice that recalled Sarah Vaughan and a classic soul sound, Baker became one of R&B's premier artists in the late '80s and early '90s with hits like "Sweet Love," "Rapture" and "Giving You the Best That I Got."

But she dropped off the music scene nearly a decade ago after releasing the album "Rhythm of Love" in 1994. At the time, Baker, who is married, had two young sons (now 10 and 11 years old); a mother suffering from Alzheimer's; and a father dying of bone cancer.

"I couldn't focus on the music at all. I tried, but each time I tried, that door was closed to me," she said. "My parents were dying, and I couldn't write."

"She took care of me, she didn't hand me off to someone else," Baker said of her mother. "I'm really happy in retrospect that I did it that way, because she breathed her last in my arms."

"It was almost like I was given permission when she passed."

Baker had a deal a couple of years ago with Atlantic Records after being wooed by its legendary founder, Ahmet Ertegun, but an album never materialized. "I couldn't fulfill my obligations to him and I really regret that, because he's a wonderful man," she says.

Baker began touring, but she doubted whether people would buy CDs of her smooth, adult R&B in today's marketplace.

"For the past five years I had been channel surfing and all you see is MTV and kids. The demographics became very very young. I figured I was relic and my time has passed. And I figured I had something to offer in the jazz arena," Baker said.

But when she contacted Bruce Lundvall, head of Blue Note Records, about recording a jazz album, he told her he'd be interested in an R&B album from her as well.

"She is one of the great artists, no question about it," Lundvall told the AP. "There's not another voice out there like hers, it's instantly recognizable."

Baker has already written songs for her new album, which she says "has the same elements of R&B, jazz and gospel influences throughout, because that's just me."

But Baker says she's interested in working with new artists, such as Alicia Keys or bluesy guitarist Robert Randolph, who wowed the Grammy audience last month with his performance.

Baker says she's not going to conform to today's musical scene: "Even at the height of my career, I was always not quite with it, I was always off doing my own thing."

And she says fan response to her recent concert performances show there's still an interest in her own style.

"I didn't know that anybody would give a hoot," she laughed. "I'm pleasantly surprised."

Moody left the group in October, packing his bags the morning before a concert in Berlin and catching a plane out of the country.

"I don't understand Ben," Lee told Newsday in Sunday's editions. "He makes a lot of very impulsive decisions, and he does whatever he wants for the moment."

Evanescence won the Grammy Award for best new artist this year, having conquered radio with the single "Bring Me to Life" and selling about 3.5 million copies of their debut album, "Fallen."

"He has a lot of creativity on the guitar end that we might have been lacking," she said. But mostly, Lee can't wait to stop touring and start writing songs for the next album.

Sixpence None The Richer Breaks Up

NASHVILLE, TN (AP) — Christian pop group Sixpence None The Richer, best known for their 1999 mainstream hit "Kiss Me," is breaking up after 10 years together.

Members Leigh Nash and Matt Slocum announced the split in a letter to fans published in CCM Magazine.

They offered little reason for disbanding, but Nash recently had a baby and said she plans to devote more time to her family. Slocum said he wants to travel and may go back to school.

The band, which took its name from a passage in a C.S. Lewis book, formed as a Christian group in Texas but relocated to Nashville and found mainstream success in 1999 with the singles "Kiss Me" and a cover of the La's "There She Goes."

Their latest album, "Divine Discontent," was released in 2002 after long delays because of contractual problems. It included the singles "Breathe Your Name" and a cover of Crowded House's "Don't Dream It's Over."

"The New Sound: Les Paul and the Electric Guitar" is scheduled to open Friday at the Rock and Roll Hall of Fame and Museum in Cleveland.

Paul, a native of Waukesha, was inducted into the hall of fame in 1988. He's scheduled to perform during opening ceremonies for the exhibit.

The Waukesha County Historical Society & Museum has secured two cargo vans of his sheet music, photographs and other collectibles for an exhibit proposed for downtown Waukesha, but that exhibit isn't expected to open for two to three years.

The "New Sound" tribute highlights Paul's place in rock 'n' roll history, while the Waukesha exhibit will focus on his childhood and how he started tinkering with music and recording, Baker said Monday.

"What's really important is to tell the story of what Les did," she said. "How did the kid from Waukesha change the world?"

The two facilities could eventually wind up sharing artifacts, he said. "We're not in competition."

Paul said there's plenty of memorabilia to go around.

"If Waukesha needs more, I have more," said Paul, who now lives in New Jersey. "All they've got to do is ask."