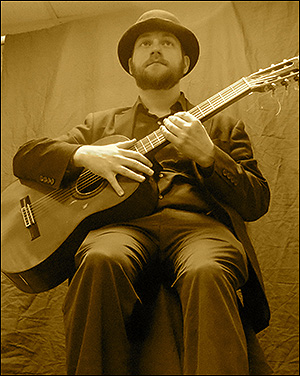 (CelebrityAccess) – Born in Muscatine, Iowa, Brooks Strause has been playing and singing since the age of 13. After many years, and playing with multiple bands, he moved to Iowa City and put together his regular backing band, The Gory Details.

The Chymical Wedding of Brooks Strause was recorded with Pat Stolley (The Multiple Cat) at Futureappletree Too studio in Davenport, IA, in 2013. Strause approached Stolley to make the album, with Strause laying down vocals and guitar. Pat Stolley played bass, and called in fellow musicians, Phil Pracht (drums), John Gamino (keyboard), and Jeff Jackson (guitar), to round out the record.

The Chymical Wedding of Brooks Strause was written in the early months of 2012 after Strause went through a break-up and responded by getting heavily into mysticism, including tarot, magick, and rituals.

He first envisioned the record to have a fifties-era rhythm and blues sound, later deciding it would benefit from a greater level of personal detachment. This is the first of Strause's seven solo albums not to be produced or co-produced by himself. In his words, “Pat did an excellent job and it turned out to be one of my favorite records.”

Check out Brooks Strause's new video for "Really" directed by Jon Burns and featuring Pat Stolley of The Multiple Cat. Explaining the meaning behind the new track, Strause said: "'Really' is about how we build up our attraction sometimes. You might glorify one person from a distance to the point of it becoming part of your personal mythology. You might have a moment of clarity, realizing that infatuation with your subjective idea of another human being cannot, in fact, be love."