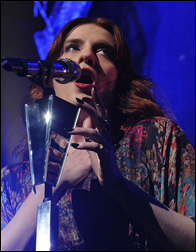 NEW YORK (AP) — Florence + The Machine are more like FLORENCE + the machine:

There's no question who dominates.

Florence Welch was first signed as a solo artist, and the CD booklet for their

latest album, "Ceremonials," has 14 pictures of Welch, none of anyone else.

But her band plays an integral part in her otherworldly sound: "She has definite

And if the band ever has a breakout player, Monger might be it. Welch calls his

addition to the band, which now stands at seven, "a total fluke": Shortly after

recording the "Dog Days Are Over" from the band's album "Lungs," which included

a keyboard sound simulating a harp, Welch was sitting in a studio when Monger

walked by, carrying something that Welch said "looked like a telephone box

wrapped in a blanket."

She wondered what it was, and Monger told her it was a harp. She quickly invited

him in, and The Machine soon had a new member.

But he's not your parents' kind of harp player. He takes the instrument out of

the parlor and plays with strength and aggression.

instrument played by ladies in long dresses and very regal settings," he said.

"That doesn't have to be the case."


Leave all that to Welch, who has drawn comparisons to Stevie Nicks for flowing

"Only If For a Night," is about a ghost (the singer finds it "so strange, so

surreal, that a ghost should be so practical"). In "Seven Devils," she talks

about how "all your love will be exorcised." She proclaims on "Shake it Out"

that "it's hard to dance with the devil on your back."

worldwide, was a quilt with a number of different producers, including Paul

Epworth, whose work with Adele helped take the British singer to the top of the


"I wanted to make a sound that was cohesive, that was a whole, rather than a

collection of songs that sounded quite separate," the 25-year-old Welch said. "I

wanted a sound that floated through the whole album."


She and Epworth took a different approach for "Ceremonials," which was released

last month. Welch feels it represents her varied influences, which range from

Hole and Nirvana to Kanye West and Jay-Z, and Beyonce. Rihanna and Lady Gaga are

also favorites, as are Spiritualized. And Kate Bush.


"There's a real sense of people being into loads of different stuff at once,"

she said in a recent interview. "I think you kind of get that from this record,

the fact that I've been into so much different stuff. Style-wise, it touches on

so many different things."


Welch said she and Epworth "kind of geek out together on drum sounds." They


Rolling Stone described it, without really defining it, as "a very British

record," a point that was echoed by VH1 music executive Rick Krim.


"It's not American, whatever that means," said Krim, executive vice president

for talent and music programming. "It feels like it's from the hills of England


Krim and VH1 have signed Welch to participate in its upcoming "Divas" special,

where she will represent British soul music. Next year, MTV will air an

"Unplugged" episode with the band. Krim said he was impressed by the


"She's not trying to make cookie-cutter Top 40 music," he said. "She does one

that will fit a format."