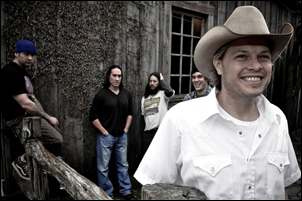 set High In The Rockies: A Live Album is a collection of inventive Red

Dirt country. Crackling with the raw outlaw voltage that has made them one of

the rising forces in contemporary country, material divided between

Stragglers standards and fan favorites. Whether reveling in the Okie kickback

“Bottle By My Bed,” their sound, characterized by their musicianship.

Constantly reaching out for fresh new sounds and attitudes, with nods to such

dobro, fiddle and mandolin, High In The Rockies is a mix of the progressive

and the traditional. Released via Boland’s own label, Proud Souls

Entertainment, in conjunction with the Apex Nashville label and Thirty Tigers

distribution, it was recorded on four consecutive nights at January 2010

performances in Colorado and Wyoming, and the band displays authenticity–

stubborn, proud, and unfettered. Throughout, the freewheeling creative

promise of the Red Dirt movement never goes unheeded. It has been a hard-

earned escalation, one that comes after Boland was sidelined by surgery to

remove a polyp from his throat, an incident which led not only Boland, but

potentially devastating turn of events. Typically, they flipped the

experience from defeat to victory, instilling a renewed energy and drive

which resulted in this extraordinary recording.

“We’ve got totally a different perspective.” Boland said. “That was heavy, a

paradigm shift — a sea change. It was the one thing that could park us all.

But I look back on it and I wouldn’t trade it for anything. It made us all

stop and re-evaluate life, the band, touring, but we’re back at it hard, with

a new, very achievable goal: that the most important thing is we now make

music that we truly feel, and I’m thankful for that.” As a result, Boland’s

commanding vocals, at once relaxed yet fraught with tension, pack the lyrics

with a depth of forthright veracity, a rich psychic quality that the band’s

full throttle jams easily match, and the urgency of the Stragglers’ innate,

road-seasoned dynamism and talent further heightens High In The Rockies’

A steady ascension finds the band averaging over 200 shows a year, and with

album sales exceeding 200,000, Jason Boland and the Stragglers represent a

singular, self-propelled country phenomenon. “It was time for a live album,

and also to get a photograph of the five of us now,” Boland said. “I’m really

happy with the material we chose. It stems from The Bourbon Legend and Comal

County Blue and we went back and mined a couple of our older songs, and songs

Whether questioning life’s ironies or examining his own restless discontent,

Boland’s involvement and conviction gleams with the undeniable capability of

observations and soul-deep expression, High In The Rockies documents a

transformative period for the band and continues the career trajectory of

Jason Boland and the Stragglers.. “We got over being young and the entrapment

of limitations on your instrument, vocals, writing–and the entrapments of

over-think it and simply do the music honestly. I don’t care about fame or

Idol.’ We look to the populist grassroots, we’re not in it for fame and cash.

Seriously, it’s all about living free.”