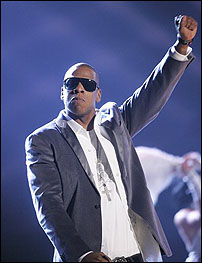 UNITED NATIONS (AP) — In a chamber where matters of worldwide importance are usually debated by reserved diplomats, several hundred people are waiting to hear from one of the most alluring international figures of all, Jay-Z

Beats and rhymes pumping through the speakers, a group of policy makers, music industry executives, dignitaries and schoolchildren patiently wait for the arrival of Jay-Z, who is premiering his MTV documentary about his firsthand experiences researching the global water shortage crisis. Soon, the superstar rapper enters with an entourage of…

Wait. Let's back up a second.

Jay-Z — Hova, Jigga Man, the ultimate hustler from Brooklyn — is at the United Nations, being hailed as a humanitarian. And songs like "Give it to Me" are playing in the background.

To put this into perspective: Chances are mighty slim that you'd ever hear 50 Cent's "G-G-G-G-UNIT!" chant here. And no matter how much Jim Jones is "BALLINNN!!!!" these days, he'd be more likely to appear on "Dancing With the Stars" than set foot inside the U.N.

Such is life these days for rap's king, the recently unretired Jay-Z. Now a global superstar, Jay-Z seems more like an elder statesman — at 36, he's the president of Def Jam Records, has sold tens of millions of records, is head of the Roc-A-Fella dynasty, part owner of the New Jersey Nets pro basketball team and a living rap legend.

Yet Tuesday's release of his comeback record, "Kingdom Come," may be the biggest challenge of his career.

Jay-Z is once again working with the trendiest hitmakers — The Neptunes, Dr. Dre, Kanye West and Sean Garrett. But while "Show Me What You Got," the first single, is a definite party jam, Jay-Z calls the record "very mature."

"It was very important that I made a record reflective of where I am in my life. Too many people, when they get like 30 years old, they still try and make records for like, 15-year- olds, and that makes the genre so small and narrow," says Jay-Z, sitting on a private jet during a one-day, seven-city promotional trek across the nation (he did concerts at each stop).

"People who grew up listening to hip-hop, we still love hip-hop when we're 30 or 40," he says. "I just felt it was very important for me to make a grown up album and that's the tone of it, the whole album."

But hip-hop is dominated and driven by youth. Though veterans are still making hits — Snoop Dogg is also in his 30s, as is Eminem — most of the big songs come from young rappers, or older stars gearing their music toward youth, like producers Lil Jon and Jermaine Dupri.

But Jay-Z is no longer interested in making hits strictly for the kids or the clubs. In an industry where stars try and shave years off their ages, Jay-Z proudly talks about getting older on "30 Something," with lines like: "I know everything that you wanna do, I did all that by the age of 22," boasting "30's the new 20." And on "Lost Ones," he raps over a melancholy piano melody about past problems with girlfriend Beyonce and his split with Roc-A-Fella founder Damon Dash.

Garrett, the producer behind hits like Fergie's "London Bridge" and the Pussycat Dolls' "Buttons," says Jay was especially concerned with not trying to replicate what's being heard in the streets.

"He's a real thinker. He really was looking for very particular sounding records and really big tracks, and things that didn't sound like something already out there," he says.

"It used to be before … to get in the game you had to really be saying something," adds Garrett. "I think whenever Jay releases an album … his perspective on things is always genius."

Certainly, the maturation of Jay-Z — whose biggest songs include party anthems like "Big Pimpin'" and "Give It To Me" — has not been overnight. On his past album he bragged about being too old to wear jerseys — and button-down shirts instantly became popular on the streets.

But whether fans want to see the vulnerable, emotional Jay-Z remains to be seen. Tracks from "Kingdom Come" have been leaking on the Internet for weeks, and the response has been mixed. A few have even boldly wondered whether Hova has lost his edge.

In addition, some of his rap peers have been jabbing at Jay. Method Man and LL Cool J, both on Def Jam, complained about his skills as a record exec when their albums bricked. DMX insinuated he was getting soft because of his romance with Beyonce, while Cam'ron and his buddy Jim Jones — who is on fire with the hit "We Fly High" — are taking pot shots at the king.

While Jay-Z just recently released a track responding to Jones — "I do that so people won't rely on my patience," he chuckles — he defends his tenure as president of Def Jam and denies the notion that his album release is overshadowing those of other rappers on the label, most notably his former arch-enemy and now friend, Nas, whose disc is due in December.

"That's just people wanting to talk. It doesn't make sense. Def Jam is set up to put out 70 albums," he says. "I believe every time I do an interview when I speak of them, I'm not taking their shine, I'm adding to their visibility."

And of course, increasing his own. Though he "retired" with the release of "The Black Album" in 2003, he's hardly been on hiatus. He recently wrapped up a world tour, has had several high-profile performances, been the subject of a documentary, and guested on many tracks, most notably Beyonce's.

And while he's always been a multiplatinum seller, his appeal seems to be getting more mainstream with each day. He's got a high-profile ad campaign with Budweiser and Hewlett Packard; he's even reaching out to the NASCAR set by featuring Dale Earnhardt Jr. and Danica Patrick in the "Show Me What You Got" video.

"I believe that hip-hop is so broad — I just want to show how far-reaching hip-hop is," he explains. "I'm not doing anything that's a stretch. I'm just really taking hip-hop into these places."

Such as the United Nations. At the recent ceremony, a representative for U.N. Secretary-General Kofi Annan apologized for his boss' absence, explaining that he wanted to be there — but was tied up trying to sort out a Darfur peace agreement.

But others are there to laud Jay-Z for his involvement, and the rapper himself — looking positively collegiate in a jacket, sweater vest and button-down shirt — implores more action on the issue.

No, this is not the same Jay-Z who once bragged about bling, sipping Cristal, hustling drugs or one-night stands. But it is still Jay-Z. Just on another stage, in a more adult phase.

"I get involved in different things now, and actually start caring about different things," he says. "There's only so many Maybachs you can have, you know what I'm saying?"