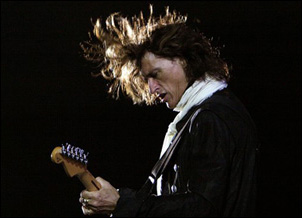 NEW YORK (AP) — Joe Perry says there's still life in Aerosmith, but after an unlikely turn of events, he focused his energy on his latest solo project, "Have Guitar, Will Travel."

While the record was in the planning stages, it was the cancellation of the Aerosmith's tour because of lead singer Steven Tyler's stage accident that propelled Perry to finish his fifth solo effort, out this week. Perry says it came together in record time, using his other band's latest effort as a measuring stick.

The guitarist was candid in a recent interview on the making of the new album, how he found his singer and his touring plans.

AP: After Steven's accident canceled the tour, you quickly assembled this band. Tell us about it?

Perry: I knew when he walked by, we're off the road again, and at that point I knew I was going to … push my record on the way home. And that's what I did. … so the bottom line is that every hole that Aerosmith left I filled. And I'm still doing it.

AP: Once you got the band together, how long did it to record the album?

Perry: This took place over the course of about a month. It's kind of unheard of in the business these days, when it takes a year to make a record or in Aerosmith's case, five years to make a record, which hasn't been made yet. But it was a lot of fun. We went down there and played, and all the guys were skilled and talented and paid their dues.

AP: How would you describe the record?

Perry: I forget if it was Martin Mull quoting Frank Zappa, or — it sounds like a Frank Zappa line, where he said, "Talking about music is like dancing about architecture." And that's why I named my first solo record, "Let the Music Do the Talking."

AP: Where did you discover your new lead singer, Hagen?

Perry: My wife found him on YouTube, and it was one of those chance things … she's not in the habit of looking at rock singers on YouTube. We're both conspiracy fans, and we usually look to scratch onto the service for the news. As it turned out, she came across this guy singing on YouTube. His name is Hagen. He's from a small town in Germany. He really, really had the pipes.

AP: What was Hagen's response when you tapped him to be you singer?

Perry: I think he was nervous at first. He's 30. He comes from a small town. I come from a small town near Boston … that's kind of out in the boondocks. … Given Hagen being 30 and working in club bands and things like that — if I would have gotten a call from Jimmy Page or from Robert Plant saying I need a guitar player … I would still be in shock."

AP: What is the single Hagen's on?

Perry: The single is called, "We Got a Long Way to Go," and that was one of the songs that I wrote after I started working with Hagen and realized what he could do."

AP: What about the Aerosmith tour?

Perry: Aerosmith has four gigs that we have to do at the end of October. We were contracted to do those months and months ago. I hope Steven is well enough to do those. Aside from that, it's kind of wide open. My plan — and I hope it works out — is basically to put the record out, promote it and do kind of what we're doing now.

AP: Will you perform any Aerosmith songs on your solo tour?

Perry: We are rehearsing some Aerosmith songs to play in the set and there are some songs that I really want to do from Aerosmith. … "Walk This Way," is probably one of my most recognizable riffs; why shouldn't I play it if the band can pull it off?

AP: What makes playing live special to you?