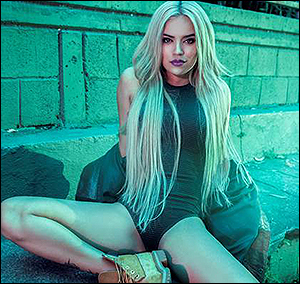 (CelebrityAccess) – Urban rising star Karol G is joining Univision's "Pequeños Gigantes USA" as a team captain. Airing on Feb. 6 Monday through Thursday on the Univision Network, families will want to come together to watch the show. The Karol G team will call themselves the "MVP G'S." "Everything they set themselves out to do they can achieve, the key is to be perseverant," the Colombian singer said in a statement. The "Hello" singer joins the new talent show with Prince Royce, Luis Coronel and Bianca Marroquín as judges.

Karol G showed her musical inclination at 5 Years old. Since then she dedicated every moment of her life to her artistic preparation, most of which we witness in her musical works.

She made her debut in 2012 with her hit single, "301" next to the Urban artist known as, Reykon "El Lider". This song became number one in many television channels and radio stations in Colombia. She then decided to travel the world in an effort to explore more options and see how far she could take her music. In the process, she took to social media to record Youtube videos and connect with fans and caught the attention of Universal Music Latin Entertainment. In February of 2016, she was officially signed to Universal Music Latin Entertainment.

Since then, her career has taken off with a massive fanbase via social media outlets. With traffic reaching millions of views via Youtube and a large following via Facebook, Twitter and Instagram, she is paving the way for Latino women all over the world who want to be musicians in the male dominated Urban/Reggaeton genre.

Her hit single "Amor de dos" in the Urban genre, Dancehall, featuring the Puerto Rican artist Nicky Jam received rave reviews. It shows a romantic side with a theme for lovers. The music video was filmed in Antioquia, Colombia and continues to receive an enormous amount of support and positive feedback from fans. Other successful hits include, “Casi Nada,” “Ricos Besos,” “Muñeco de Lego” and “Ya No Te Creo.”

According to the Billboard charts, the young Colombian singer’s current single, "Hello" feat. Ozuna is among 20 of Urban music’s most popular songs of the Latin Rhythm Chart and continues rising in the Hot Latin Songs and Latin Airplay chart of this same publication. The music video for “Hello” feat. Ozuna has reached over 50 million views in less than three months of its release while at the same time accumulating more than 8 million reproductions on SPOTIFY. The song has been described as one of the more important platforms of Reggaeton music as well as a continued increase in popularity in several Latin American countries and Spain.

Karol G’s dedication goes beyond the limits. While many artists prefer to play it safe, she is an unpredictable and adventurous artist who knows how to navigate between musical genres. She has put out Rock and Dance songs, Romantic songs and songs with rhythms of Merengue; all showcasing her versatility, the power of her voice and the confidence she has to take risks. Karol G knows the meaning of working hard and knows sacrifices need to be made for continued success. She strives to be "unique" and "exceptional."

Karol G is nominated for “Artista Feminina del Año 2017” in Premio Lo Nuestro 2017. She is currently in the United States performing a series of concerts and promotions that led to her performing at the renowned Urban Festival Calibash in Los Angeles, CA and will soon be visiting Las Vegas and Miami. ~Luisa Moreno