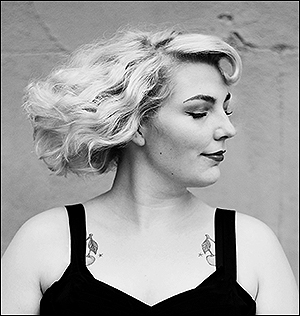 (CelebrityAccess) – Nina Massara is putting everything she has into a sound she hopes will bring the music she loves to every generation, young and old.

Nina has the looks of a retro black and white movie star with a sassy voice that will remind you of modern day belters like Rhiannon Giddens, Victoria Williams, and Valerie June. With a tinge of “I told you so” in her voice, Nina takes on critics and fans with her U.S. debut, Watch Me. This album is set to release on March 3, 2017, on CSP Records, an independent label out of Texas. Label President Jimmy Rogers, who has spearheaded many a blues artist over the past 40 years, was so knocked out by her that he signed her on the spot.

Recorded and produced by Morten Wittrock both in Denmark and at Austin’s famous 5th Street Studios, Nina brings her distinctive vocal and personal style to a fabulous collection of original Americana songs written by producer Wittrock and Ray Weaver. These two music veterans were able to wrap the melodies and words to fit this young budding talent. Ray Weaver is an American songwriter living in Denmark whose work has been compared to Kevin Welch and Steve Earle. Combine that with Morten’s rocking blues the two succeed with songs like, “Impossible To Resist” a duet with Colin Brooks, who is a former member of Band Of Heathens now an Austin session player. The two bring a playful and flirty flavor to the tune with a funky back beat. A Bourbon Street drenched “Big Easy” recalls her American father’s Louisiana roots complete with a slide guitar that echoes a slow gait down the sidewalk.

Raised in Denmark by her American father and Danish mother, Nina grew up listening to legends like Delbert McClinton, Keb’ Mo, Taj Mahal and Bob Dylan while working beside her father in his local Mexican restaurant. That myriad of influences continues as Nina accompanied her parents when they did the backstage catering for artists like B.B. King, Jerry Lee Lewis, Little Feat, John Hiatt and more. The music of legends flowed deeply into Nina’s heart, and she couldn’t wait to make her own music.

She began working in the studio with the award-winning Danish producer Morten Wittrock when she was just 15-years-old, doing everything from making coffee to editing Pro Tools tracks. When she turned 18, she bartended at Copenhagen’s storied Mojo Blues Bar continuing her musical education through experience.

Nina’s unique blend of New Orleans earthiness, a little Etta James vocal styling along with some Scandinavian sweetness this young songbird, brings a magical mojo to every song. Her voice, along with the playing and production creates a listening experience that honors both Nina’s deep commitment to her musical roots and her desire to do something entirely new.

Earlier this year this young woman moved to New Orleans to experience their extraordinary culture first hand and now she is residing in Nashville, TN to embed herself in their music community. She is brave, unafraid and determined. Nina Massara will be bringing her remarkable blend of the best of the past and the future to music lovers for many, many years to come.