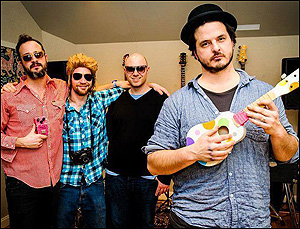 (CelebrityAccess) – Not many artists can claim to have sold-out Madison Square Gardens three nights in a row, held a farewell outdoor concert that attracted over 110,000 fans from 25 countries, making it the largest independent music event in history (outdrawing Phish's swan song by 50,000 and the multi-band fest Bonnaroo by almost 20,000), but not many are Pete Francis. As one third of the visionary indie band, Dispatch, he inspired legions of fans with an aesthetic that was as accessible and inviting as it was artistically uncompromising. Now, he embarks on a new era of inspired creativity with a multitude of new projects, including an invigorating hip-hop flavored band, Dragon Crest Collective, whose debut, Volume 1, drops June 23; a vibey studio open to the public; and through offering his own unique production services to recording artists.

Dragon Crest Collective is a homespun, collaboration-fueled foray into the most groove-heavy territory the singer/songwriter/multi-instrumentalist has ever explored. On the group's debut, Volume One, Francis drew much inspiration from the fusion of groove-powered instrumentals and lo-fi hip-hop that the Beastie Boys offered up on their 1992 classic Check Your Head. Dragon Crest Collective finds the Dispatch co-founder teaming up with Danny "dbone" Golden (keyboards, drum programming), Paul Maddison (guitar, bass), and Kenny Shaw (drums) to create a joyfully hip-hop-inspired take on alt-rock. Special guests on the album include guitarist Darian Cunning (who tears through a transcendent solo on the bass-soaked, ultra-danceable "King Kong") and the Funky Dawgz Brass Band (who heat up tracks like the chant-along-worthy party jam "Dance Dance Dance Dance" with their fiery horn work). The album release will be preceded by the first single, "Turn Me On," an unbridled paean to family life, bursting with joyous and revelatory rhymes and stanky and rockin' hip-hop grooves.

"In all my years of making music, one of my favorite things is when a concert feels like a party," says Francis. "I wanted to make this record feel like a party too, lighthearted and fun and rockin' even though it's got its serious moments."

The album was born in Francis's self-built home studio in Connecticut, Dragon Crest Studios, which offers bucolic comforts and an eclectic collection of vintage and modern gear. The studio is open to the public and it's spirit matches Francis's bold adventurous creativity, it's versatile and compatible with a broad cross section of vibes and visions. In addition, Francis will be offering his services as a producer. Throughout his career he's traversed genres and musical eras with authenticity and bold originality. Because of this, Francis work as a producer will enable him to successfully work with a diverse array of artists and help realize a varied palette of artistic visions.

Raised in Riverside, Connecticut, Francis threw himself into the music world at age 13, when he first learned to play guitar. While studying at Middlebury College in Vermont, he crossed paths with fellow musicians Brad Corrigan and Chad Stokes and soon formed Dispatch, who self-released their debut album Silent Steeples in 1996. At the start of an extended band hiatus in 2001, Francis put out his solo debut So They Say, then went on to create six more solo albums over the next decade while eventually reconnecting with Dispatch (whose most recent endeavors include the release of a double live album in 2013). "After working in music for almost 20 years, I'm more willing than ever to try a lot of different styles and work with a lot of different musicians and see what's musically possible," says Francis of his work with Dragon Crest Collective. "There's an amazing sense of freedom to stretch the boundaries and go off into completely new directions, and I really love taking advantage of that."