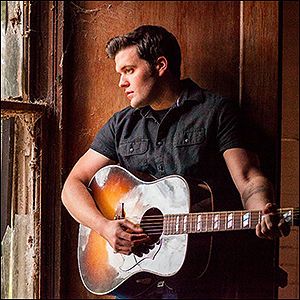 (CelebrityAccess) – Coming off a 20-date spring tour, Americana roots rock artist Rod Melancon, partnered with ElmoreMagazine.com to premiere "Promises." The track is one of the highlights on his sophomore 10-track album Southern Gothic, out Friday, June 16 via Blue Elan Records.

On the gritty rocker "Promises," the singer, songwriter and musician–born and bred in South Louisiana before moving to Los Angeles a few years ago–looks into the rearview window of his life, movingly drawing the listener in with such lyrics as: "The coach came down from LSU/Says I hear there ain't nothing that you can't do But I turned back/Heard a crack/You know it still hurts me when I walk now."

Southern Gothic will be available digitally and physically on CD and vinyl. The album can now be pre-ordered–which includes instant-grat tracks, "Dwayne & Me" and "Redhead"–via iTunes here, Amazon or Blue Elan Records for special packaged bundles.

Last month, GlideMagazine.com premiered "Redhead" from Southern Gothic, with Neil Ferguson raving that "on his forthcoming album…the dapper rocker takes a look inside the place where he grew up and puts the people and stories to music in what can be described as dark Americana and workingman's rock and roll…the tune ['Redhead'] brings to mind Jason Isbell at his fiery best with a dose of Jerry Lee Lewis' rocking country swagger thrown in, making it a perfect anthem for a whiskey-soaked night on the town."

Melancon generated an early buzz in the cities where he just toured (3/30-4/28). Writer John Wirt of The Advocate (Baton Rouge, LA) called "Redhead," a muscular blend of rock and dirty blues with "Rolling Stones swagger" and Julia Fechter from The George-Anne (Statesboro, GA) cited the song as "full of festive language, guitar riffs and, surprisingly, a saxophone solo.” Elsewhere, Rosemary Scott noted in The Red & Black (Athens, GA), "His sound is reminiscent of his childhood in Louisiana-rough and edgy with a hint of Southern twang."

Southern Gothic–which Melancon pushes the sonic soundscape–is a journey into the dark, and often twisted, night of the soul. Recorded over the course of two years and produced by Brian Whelan, it is the restless yearning of a young, new South that has been represented by The Drive-By Truckers, Sturgill Simpson and Jason Isbell. With this new album, Melancon takes an unflinching look inside the heart of Americana darkness as he stylistically dives deeper into the roots of his own imagination nurtured in the badlands and bayous of his home.