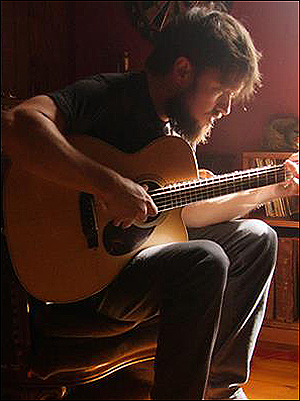 CelebrityAccess – Following the world-premiere performance of the entire album streamed on Facebook Live on February 16th to an audience of over 33,000 viewers, Ryan Montbleau released his new album, I Was Just Leaving this past Friday, March 3rd.

Ryan Montbleau has been an acclaimed singer, songwriter, and bandleader for more than a decade, but with his new album I Was Just Leaving, the New England-based artist has truly arrived. Contemplative and richly emotive, the album offers a glimpse into the often-lonesome life of the relentlessly traveling troubadour, a strikingly single-minded existence too often clouded by the blur of constant motion. Recorded at New Orleans’ Esplanade Studios over four days in January 2016 with producer Anders Osborne and engineer/mixer Mark Howard (known for his work with such icons as Bob Dylan, Tom Waits, Neil Young, and U2), the album marks Montbleau’s first full length release in the wake of a series of seismic personal shifts. Songs like “Bright Side” and the touching title track reveal a uniquely blessed artist who has truly found his voice, his gift for melody and a remarkably open-armed approach.
I Was Just Leaving marks a singular milestone for Ryan Montbleau, the moment in which this exceptional singer, songwriter, and performer has blossomed into a fully matured artist.

“I’ve been planting these seeds for so long and it has all led up to this moment. It feels like finally the fruits of all my efforts are coming out. I’m still working hard but there’s an ease to what’s happening. I have a career that I’ve built, that I’ve earned. Now what’s fun is putting out the best music I can and seeing what happens.”

For I Was Just Leaving, Montbleau headed down to New Orleans, La., recording the disc over the course of four days at Esplanade Studios in January of 2016. The studio is an incredible spot — a 14,000-square-foot former church in the city’s Treme neighborhood, restored and renovated — and while Montbleau, producer Anders Osborne and engineer Mark Howard has access to the whole place, “we used none of that, and we did the whole record in the control room,” Montbleau says.
“[Mark] does this kind of amazing thing where he gets [the music] to shimmer by just sort of being live in the room,” Montbleau continues, explaining that he wasn’t expecting to record that way, “but it was fine; it was so comfortable.”
Together, Osborne (with whom Montbleau has worked before) and Howard (whom Osborne recommended to Montbleau) “just did such a great job of leaving the air in the room and just getting really raw, heartfelt takes of things.” When selecting which takes to include on I Was Just Leaving, the two went with the less-polished versions: “If it didn’t pass the test of your heart feeling it, they weren’t into it as much,” Montbleau remembers, “and they could tell quickly …” Although he was a bit skeptical at first, Montbleau says that “now, when I listen to it, I know they were right.”

On the record, Montbleau and Osborne played everything, but now that he’s touring behind I Was Just Leaving, Montbleau is bringing a full band on the road with him. They’re “[trying] to stay true to the soul of the record and the soul of the tunes” while building on their sparse on-the-album arrangements for live shows.

“I’m a songwriter: I want to be listened to,” Montbleau says. “I want to do it all … but, primarily, I’m trying to draw you in and get you to listen and get you to feel things — kind of, lock in with your truth by telling you mine.” ~Angela Stefano