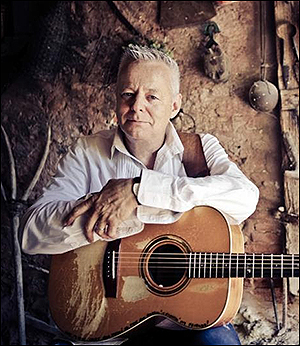 Until then, the road warrior will continue his 2017 North American tour in October with multiple shows in Hawaii before hitting the road with world-renowned acoustic musician David Grisman, and special guests Rob Ickes and Trey Hensley (on most dates), for the 12-date CGP & Dawg Tour from November 3 through 18. Emmanuel will wrap the year on his annual "Classics & Christmas Tour" taking the Australian throughout the Midwest and Texas from November 30 through December 16 performing sets of both original music and Christmas music.

2018 will bring additional excitement as Emmanuel, currently in the studio, will be releasing new music (all details TBA). His latest offering, LIVE! AT THE RYMAN (May 2017 via CGP Sounds), received praise from Rolling Stone Country's Jon Freeman who raved, "…Emmanuel gives a typically dazzling performance of 'Tall Fiddler,' the opening track from his new album Live! At the Ryman…what begins as an impressive display of his picking mastery – neatly articulated arpeggios with some funky, percussive strums and that quickly loping melody – transforms into something mind-boggling as Emmanuel speeds up the tune by double and does it all again." (May 15, 2017)

LIVE! AT THE RYMAN captures a special night of music and highlights Emmanuel's fervor as a master guitarist. Recorded in Nashville, TN on February 27, 2016 at the historic Ryman Auditorium, the album encapsulates a landmark moment for the musician as he is joined on stage by Steve Wariner and John Knowles, the only other two living CGPs (Certified Guitar Players: the honor and moniker Chet Atkins assigned not only to himself but four other guitarists he admired and felt contributed to the legacy of guitar playing) for a performance of "San Antonio Stroll." GuitarWorld.com premiered the performance video of that special moment–the only time all three living CGPs shared the stage.

ABOUT TOMMY:
Give a listen to "Old Photographs," the closing track on Tommy Emmanuel's It's Never Too Late, and you'll hear the distinctive squeak of finger noise as he runs his hands across the frets of his Maton Signature TE guitar. Many musicians would edit those imperfections out, but to Emmanuel, those imperfections are perfect. A master technician, Emmanuel started professionally at age 6, rising through the ranks as a studio player and member of several Australian rock bands before he set off on a solo career. One of only five musicians handpicked by his mentor, Chet Atkins, as a Certified Guitar Player (CGP), he's piled up numerous accolades, including two Grammy nominations, two ARIA Awards from the Australian Recording Industry Association (the Aussie equivalent of the Recording Academy) and repeated honors in the Guitar Player magazine reader's poll.

A noted fingerstyle guitarist, Emmanuel frequently threads three different parts simultaneously into his material, operating as a one-man band who handles the melody, the supporting chords and the bass all at once. His talents, which translate in any language, carry him to the far corners of the globe, but EMMANUEL never plays the same show twice, and he improvises big chunks of every date. That leaves him open to those technical imperfections, though they also provide some of the humanity to an other-worldly talent.