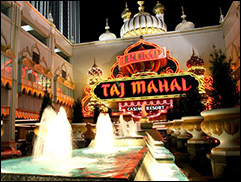 ATLANTIC CITY — The owners of Trump Taj Mahal Casino Resort revealed on Wednesday that they plan to close the casino after labor day weekend.

According to the Press of Atlantic City, Tony Rodio, president and CEO of Tropicana Entertainment said the casino is losing millions of dollars a month and the owners have “fiduciary duties to their shareholders.”

Casino management also laid the blame for the closure on union Unite Here Local 54, which has been on strike for more than a month over the loss of healthcare and pension benefits, suggesting that the union blocked the “path to profitability" for the casino.

The casino employed more than 2,100 people at the end of 2015, according to filings with the state Division of Gaming Enforcement.

Initially opened by casino mogul Donald Trump in 1990, and has been through several bankruptcies, most recently in 2014, eventually becoming a subsidiary of Icahn Enterprises under the management of Tropicana Entertainment, another one of Icahn's subsidiaries.

When he took the casino over, Carl Icahn pledged to invest 100 million into the property but has since pulled back from that offering, citing ongoing negotiations for casinos in northern New Jersey.

When it closes, The Trump Taj Mahal will be the 5th major casino in Atlantic City to close since 2014, following on the heels of the Showboat Casino, Revel, Trump Plaza Hotel & Casino and The Atlantic Club Casino Hotel. – Staff Writers