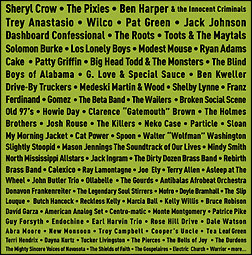 Building on the excitement of the 30th anniversary of the legendary public television show Austin City Limits, the Festival showcases a diverse lineup of musical talent, including rock, bluegrass, country and funk.

“It’s been truly incredible to watch the Austin City Limits Music Festival grow and receive such a great response from both artists and fans. What started out as an idea to share the show with a large audience has grown significantly into one of the country’s top music festivals,” said Charlie Jones, promoter and principal at Capital Sports & Entertainment, which organizes the Festival (and co-produces the television series with KLRU-TV). “2004 looks to be another amazing year for Austin City Limits. We’re bringing back some of our favorite artists as well as fresh faces to deliver an unparalleled musical experience.”