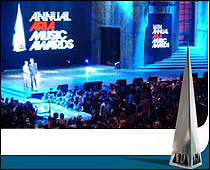 SYDNEY, AU (CelebrityAccess MediaWire) — In a history making year for local music artists, a record number of Australian performers were honoured on August 3 at the annual ARIA No. 1 Chart Awards in Sydney . Thirteen Australian performers, some with multiple entries at the No. 1 position, were recognized for their achievements in front of members of ARIA (Australian Record Industry Association) and the media at a special presentation designed to raise public awareness of Australian artists.

While they have all achieved the coveted No. 1 position on either the ARIA Singles or Album chart (or both) in the past year (August 4, 2003-August 2, 2004), this group of artists is the most varied in recent history – a tribute to the rich diversity of the Australian music landscape.

Together they have racked up the unprecedented number of 20 separate entries at No. 1 on either the ARIA Album or Singles charts in the year long period. This includes the first album, ‘One Determined Heart', by Paulini which made its debut at No. 1 on August 2. This is the greatest number of Australian artists hitting the No. 1 position in any 12 month period in the 21 year history of the ARIA Chart.

Some artists have achieved No.1 Chart success on both the ARIA single and album charts. Delta Goodrem, Shannon Noll, Guy Sebastian and Paulini have achieved this feat in the past 12 months. The Hillsong Church album For All You've Done marks the first time in Australian chart history that a Christian recording artist has held the No. 1 position in this country. Kylie Minogue officially holds the record for the most singles at # 1 in the 21 year history of the ARIA chart with a total of nine. And after a career spanning 15 years, Spiderbait have had their first ever No. 1 hit single with Black Betty.

"It is great to see so many Australian Number 1 artists this year, said Denis Handlin, ARIA chairman and Sony Music chairman & CEO. "The wide musical styles covered by the artists and the very long periods the records have charted is a very special feature as well and highlights what a great year it has been for Australian music. These artists and their labels have really connected with the Australian public and the recognition today through the ARIA No. 1 Awards is well and truly deserved."

John O'Donnell, managing director, EMI Australia and chairman ARIA Chart and Marketing Committee said, "It has been arguably the best year ever for Australian music, as the unprecedented number of releases that have hit # 1 testifies. From pop to rock to country to blues &roots to emo-art-rock, the Australian public has embraced its own like never before and reminded all of us of the power of great songs and great artists." –Jane Cohen and Bob Grossweiner