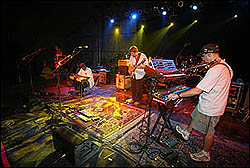 The 2002 Jammy Awards were presented October 2 at New York's Roseland Ballroom. The winners are:

Live album of the Year: Widespread Panic, "Live in the Classic City" (Widespread/Sanctuary)

New groove of the year: Robert Randolph & the Family Band

The country duo played to an audience of almost 11,000 people in a Mississippi town with a population of just under 8,000. The Stars Over Mississippi benefit event in Amory, Miss., this past weekend also brought out actors Ray Romano and Whoopi Goldberg. The bi-annual concert is the main fund-raising arm of the Mary Kirkpatrick Haskell Scholarship Foundation, which helps Mississippi students attend college.

"Any time you can go somewhere and be part of something so much larger than yourself, it's cool," Dunn said.