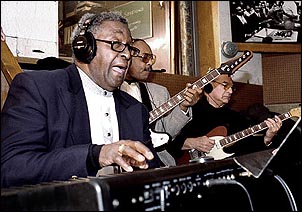 (CelebrityAccess News Service) – Van Cliburn, The Funk Brothers, Ella Jenkins, Sonny Rollins, Artie Shaw and Doc Watson will receive 2004 Lifetime Achievement Awards from the Recording Academy. Jazz producer Orrin Keepnews, songwriting team Gerry Goffin and Carole King and pianist/radio host Marian McPartland will be honored with 2004 Trustees Awards. Formal acknowledgment of the awards will be made in conjunction with the 46th Annual GRAMMY Awards ceremony, which will be held at STAPLES Center in Los Angeles on February 8. The show will be a prime-time television special on the CBS Television Network.

"The Lifetime Achievement and Trustees Awards recognize music people who have made the greatest impact on our culture," said Neil Portnow, president of the Academy. "These recipients are being honored as legendary performers, cultural ambassadors, archetypal musicians and profoundly inspiring figures. Their outstanding accomplishments and passion for their craft have created a timeless legacy that has positively affected multiple generations, and will continue to influence generations to come."

The Lifetime Achievement Award honors lifelong artistic contributions to the recording medium while the Trustees Award recognizes outstanding contributions to the industry in a non-performing capacity. Both special merit awards are decided by vote of the Recording Academy's National Trustees. –Jane Cohen and Bob Grossweiner

The four will be honored at a Hall of Fame Awards show on Feb. 11. The event will be held at Trinity Music City in Hendersonville and will be taped as a one-hour special for TBN.

"The newest inductees for the GMA Gospel Music Hall of Fame exemplify the great diversity and history of Christian and gospel music," GMA President John W. Styll said in a statement Tuesday. "Their contributions to our culture have had a profound and lasting impact."

Goodman, known as the "queen of gospel music," died Dec. 27 at age 74 of complications from the flu. She had learned a few weeks before her death that the Hall of Fame had selected her for induction.

The GMA Gospel Music Hall of Fame has inducted 125 members since its inception in 1971, including Elvis Presley, Mahalia Jackson, Amy Grant, the Oak Ridge Boys and the Jordanaires.

The GMA produces the Dove Awards, which recognizes achievement in all genres of gospel music.

OutKast, already nominated for six Grammys, will compete against itself for best song and music video, with "Hey Ya" and "The Way You Move" each nominated in both categories.

Luther Vandross, the soul singer who's recovering from a stroke, had four mentions _ for male artist and the song, album and video titled "Dance With My Father."

Best movie contenders were "Bad Boys II," "Bend it Like Beckham," "Deliver Us From Eva," "The Fighting Temptations" and "Whale Rider."

With the awards, the National Association for the Advancement of Colored People honors people and companies that support positive change for people of color in arts and entertainment.

The 35th annual awards show will be held March 6. Fox will broadcast the program March 11.

(CelebrityAccess News Service) – In recognition of his professional achievements, the Recording Academy will pay tribute to flutist Sir James Galway at its Salute to Classical Music luncheon on February 5, at the Millennium Biltmore Hotel in Los Angeles. Guests will include prominent members of the classical music community. Academy President Neil Portnow will present the seven-time Grammy nominee with the President's Merit Award. Ginny Mancini, Henry Mancini's wife and president of the Henry Mancini Institute, is the Honorary Chair for this event.

"Sir James brings the joy of music to so many people around the world, and remains dedicated to sharing his passion with the next generation of young musicians," said Portnow. "His work is truly inspired. We are so pleased to be honoring a musician of Sir James' caliber and character."

Galway is the London Mozart Player's Principal Guest Conductor. He plays and conducts with the orchestra on a regular basis. In addition to his touring schedule, Galway holds master classes annually, and donates much of his free time as President of the volunteer-based, non-profit organization Flutewise. Flutewise assists young people to further their music education by donating instruments to low-income students, setting aside flutes for use by young people with disabilities, and holding events throughout the UK to raise money for various charities.

Among his many accolades, Galway was named Musician Of The Year by Musical America, has received the Record Of The Year award from Billboard magazine, and the Grand Prix du Disque for his recordings of the Mozart Concerti. He was the only classical performer at the 1998 Nobel Peace Concert in Oslo, Norway, sharing the stage with Elton John, Phil Collins and Shania Twain. Her Majesty Queen Elizabeth II of England has honored him twice, with an Order of the British Empire (for his services to music) and with a knighthood.