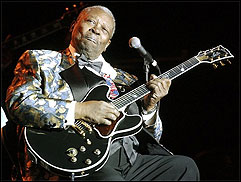 (CelebrityAccess MediaWire) — BB King broke ground today, June 10, on a museum to built in his honor in Indiola, MS, near his birthplace. Beginning in 2007, phase one of 2.3-acre, $10 million BB King Museum will open, followed by phase two and three, as they become fully funded.

"They asked to do it, and it's where my roots are," said King of the location. "Maybe it's the same reason I go back year after year to do a free homecoming concert — there's a sense of place that's very powerful and I hope it can make a difference for the children of the Mississippi Delta."

A decade in the making, the museum will be partially located within an existing, abandoned gin mill, where, as a youngster, King once worked.

The Bethesda, MD-based firm of Gallagher & Associates, which has helped design projects for the Rock and Roll Hall of Fame and the Smithsonian, is designing the museum exhibits in conjunction with architect Stephen Perkins (Tokyo Disneyland among his many projects).

Different areas of the complex, to be developed and opened in phases, will feature various aspects of King's 60-year career, many narrated and presented thru animation and recordings by King himself, including his difficult childhood in the Mississippi Delta and the early days in Memphis, where he launched his career in clubs and on local radio.

A Blues Studio, where visitors will be offered hands on experience at mixing an actual recording, and a number of other interactive exhibits, will also be featured.

A replica of the WDIA radio studios in Memphis, where the musician discovered his first real success, will also be housed at the museum.

A major museum feature, the Delta Interpretive Center, will promote a curriculum of education and cultural outreach for at risk youngsters of the mostly poor Delta region.