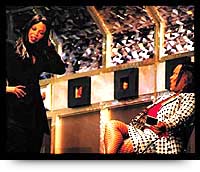 Heralded by USA Today ("Strong vocals and great cast make 'Love' happen"/February 21, 2002), "Love Makes Things Happen" is the heartwarming story of Sheila Carter, a good-looking, sharp-dressing, soul sistah at the crossroads of an ill-fated relationship. One night, while exiting the company elevator, she bumps into Chauncy Brown, who is handsome, charming and single — so, it's all good! Well, almost … now Sheila, who makes six figures a year, has to decide if she can really love a man who only makes six dollars an hour.

"Love Makes Things Happen" is written and directed by David E. Talbert. Heralded by the Los Angeles Times as "one of the most prolific theater makers in America," Talbert has toured nine plays, seen by over 2.5 million theatergoers. He received two NAACP Theater Award nominations for his plays "Lawd Ha' Mercy" and "His Woman, His Wife." His play "The Fabric Of A Man" won three NAACP Theater Awards. Talbert's independent feature film, "A Woman Like That," won the Urban World Film Award for Best Dramatic Feature. In television, Talbert's play "He Say, She Say … But What Does God Say?" was adapted to create the UPN sitcom "Good News." Two of his gospel musicals, "Mr. Right Now" and "His Woman, His Wife," have been released on home video.

This play is the first in the national Urban Broadway Series, which will present plays, musicals and gospel-themed theatrical events, which encompass contemporary African-American experiences. Under the direction of David E. Talbert, the Urban Broadway Series produces quality live theatrical events through creative collaborations with the entertainment industry's leading writers, directors and performers.