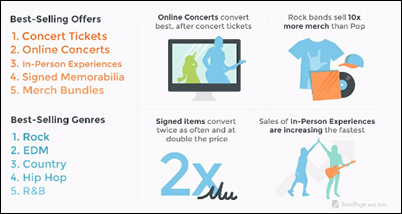 (Hypebot) – In the last year, BandPage has focused on both product improvement and partnerships. The later strategy, in particular, is starting to reap significant benefits for both BandPage and the hundreds of thousands of artists that use its services.


BandPage announced today that it is sending over 1,000,000 music fans to musician’s online stores each month. Driving the traffic are BandPage partnerships with Spotify, Rhapsody, Rdio, VEVO, Shazam, Lyricfind and other music sites. All of that traffic, along with BandPage's focus on enabling highly targeted fan experiences, is leading to significant income for artists.


relentless​GENERATOR, a company that powers hundreds D2C music and entertainment stores, confirmed that BandPage was now one of its leading sources of traffic, alongside artist websites, search, email, and social channels. “BandPage has emerged as a significant and valuable partner for GENERATOR,” said Thai Randolph, Chief Marketing Officer at GENERATOR. “If we had to replace the traffic we have received from BandPage during the past six months through a display advertising campaign, we would need to buy over one billion impressions.”


All of this traffic is also netting some interesting data:


•Offers that connect fans to their favorite artists in unique and distinctive ways, such as online experiences, VIP tickets and signed memorabilia, are the best selling items.
•Fans of the Rock, Electronic and Country genres are the most likely to buy.
•Signed merchandise products sell at prices twice as high
and twice as fast as their unsigned counterparts.
•Sales of in person experiences are increasing at the fastest rate.

”Every day we study online trends and the purchasing behavior of music fans and we’ve consistently seen the highest qualified traffic come from the streaming services and music destination sites where an artist’s customers are engaging with the artists music the most,” said J Sider, CEO and Founder of BandPage. "The goal of studying these trends and applying the findings to our industry is to always help musicians increase their revenue at a time where the main product we’ve sold for decades has been in major decline.”