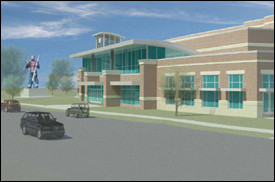 BANGOR, Maine (CelebrityAccess MediaWire) — The city of Bangor has landed a naming rights partner for the new arena currently under construction in the city — Bangor-based Cross Insurance Agency.

The $3 million, 15-year agreement will see the new arena known as the Cross Insurance Center. According to the Bangor Daily News, the terms of the contract call for quarterly payments of $50,000 by Cross for naming rights, and include a provision for a 12-month renegotiation period that goes into effect 12 years into the term that allows Cross to renew for an additional 10 years.

The deal also includes a clause that allows Cross to opt out with financial penalties but additional details about the clause were not disclosed.

"We were initially approached by Steve Rex of Front Row Marketing July 5 and made an offer July 9," Cross Insurance Vice President Brent Cross told the Bangor Daily News. “We haven’t signed a contract yet, but we have signed a solid letter of intent."

On track for their planned opening on Labor Day in 2012, the $65 million arena and events center has a capacity of about 8,000 with fixed seats for 5,800. Global Spectrum will oversee booking and operation of the arena on behalf of the city of Bangor.- CelebrityAccess Staff Writers