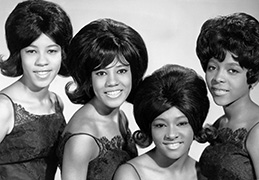 CHARLOTTE, NC (CelebrityAccess) — Barbara Alston, one of the founding members of the 1960s girl group The Crystals, has died on Feb. 16th at a hospital in Charlotte, North Carolina. She was 74.

Alston’s daughter Donielle Prophete told the Charlotte Observer that her mother died from complications from the flu.

Alston was still in a teenager, when she, along with four other high school girls, became a founding member of the Crystals at the prompting of her uncle Benny Wells.

The Crystals quickly attracted the attention of Phil Specter, who signed them to his newly formed label Philles Records after he overheard the group singing at the Brill Building in Manhattan. Spector, who at 21, was beginning to define the ‘Wall of Sound’ style that would become his trademark, and on the group’s early singles, he surrounded Alston’s lead vocals with lush harmonies and musical arrangements.

The Crystals scored early hits with “There’s No Other (Like My Baby)” (1961) “Uptown” (1962) but subsequent flops, like the controversial ode to domestic abuse “He Hit Me (And It Felt Like a Kiss)” and Spector’s willingness to cast other girl harmony groups as the Crystals on subsequent releases led to growing tension in the group.

By 1963, Alston had been remanded to backup vocals and she left the group entirely in 1965 to raise her son.

Alston later returned the Crystals for a short-lived reunion and appeared in the 1966 Broadway production of “Cabaret” as one of the Kit Kat Girls before leaving show business.

“We used to kid her about her past,” Prophete told the Charlotte Observer. “Diana Ross and the Supremes went with Berry Gordy as a producer and The Crystals went with Phil Spector, and I used to joke that if The Crystals had picked (Motown Records founder) Berry Gordy, Michael Jackson would have been our neighbor. We were always telling mama she ruined everything for us. It would always get her laughing.”

Alston was married twice, with both marriages ending in divorce. She is survived by her daughter Donielle Prophete, two children from her second marriage, Kemberly Pitter of Coconut Creek, Florida, and Kenneth Pitter Jr., of Parkland, Florida; five grandchildren; and seven great-grandchildren.