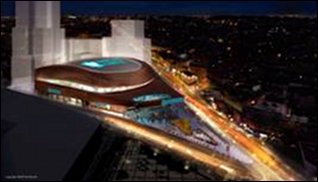 BROOKLYN, NY (CelebrityAccess MediaWire) — The Barclays Center of Brooklyn has named Jackie Alvarez as an artistic programming consultant, in which she will program the venue with a variety of multicultural shows and events. Alvarez will serve under the direction of Sean Saadeh, the Barclays Center’s Vice President of Programming.

Alvarez will further the Barclays Center’s international programming goals. With nearly two decades of experience in booking top ethnic shows for in the New York market, she will identify a wide-range of leading artists in genres such as Latin, Brazilian, Caribbean, Russian, Chinese, Korean, Indian, and more.

Alvarez served as a programmer for ethnic and non-ethnic shows and events for Madison Square Garden for 17 years.

In June the sports and entertainment venue formed a strategic programming alliance with the famed Brooklyn Academy of Music (BAM), the largest performing arts center in the borough, in which BAM will serve as artistic consultants to identify unique shows from throughout the world for the Barclays Center.

“Jackie has an extensive background in multicultural programming that will be instrumental in bringing the most diversified and exciting events to the Barclays Center,” said Sean Saadeh. “We have already confirmed 163 events for the Barclays Center and we fully expect to host more than 200 events annually. We are committed to bringing the best of sports and entertainment to Brooklyn.”