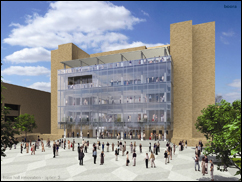 AUSTIN, TX (CelebrityAccess MediaWire) — Bass Concert Hall renovation is 75% complete with the planned 14.7 million dollar renovation and facelift, Gene Bartholomew, the public relations manager for UT Performing Arts Center, informed CelebrityAccess. The hall closed for this renovation in late May 2007. The renovation was planned for 18 months and seems to be right on schedule.

Longtime Bass Concert Hall tenants Ballet Austin, Austin Symphony Orchestra, and Austin Lyric Opera have moved to the recently opened Long Center for the Performing Arts, opening up many more dates in the venue for concerts and fine arts events.

Bass Concert Hall will be announcing their fine arts season in mid-September. The full season will be posted on their www.utpac.org
website.

The grand reopening celebration is planned to begin on January 23 or 24, 2009 with a concert event and a run through the opening of their first Broadway show, Legally Blonde.