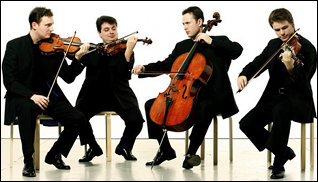 The Bristol branch of the Palestine Solidarity Campaign says the Jerusalem String Quartet has closely aligned itself with the Israeli military – a charge the musicians firmly reject, and therefore will protest in the name of, outside the Assembly Rooms in Bath on Thursday, according to This Is Bath.

The quartet will be performing at 7.30pm as part of the city’s Mozartfest, playing pieces by Mozart and Brahms.

Earlier this year, campaigners interrupted a concert by the musicians in London, while there have also been protests in Scotland, which led to the arrest of five people

The PSC says the quartet has regularly performed for the Israeli Defence Force, which enforces the occupation of land claimed by Palestinians, and say the visit is “part of an Israeli state charm offensive," according to This Is Bath.

Spokesman Ed Hill said: “People coming here for the concert may be unaware that these musicians regularly perform for a brutal army of illegal occupation. They get Israeli government funding to make the Israeli state look good around the world, hoping that people will enjoy the music and forget about the violations of human rights.”
He added: “This will be a peaceful demonstration. We’re simply asking everyone to write to the Israeli embassy and demand the same rights of freedom of movement enjoyed by these Israelis, for all Palestinian musicians and for Palestinians generally – an end to checkpoints, curfews, closures, land seizures, home demolitions and arbitrary detention, including detention of children.”

After the London Wigmore Hall concert disruption, the quartet released a statement on their website:

We believe the demonstrators were both mistaken and inconsiderate in their action.

As Israeli citizens, we were required by law to, and did, perform our National Service when we were aged 18. As it happens,we served our conscription as musicians playing for our fellow citizens. To identify our conscription, particularly since it was so long ago, with support for government policies is as irrational and unfair. The demonstrators were ignorant of the fact that two of us are regular members of Daniel Barenboim's West-Eastern Divan Orchestra, composed of Israeli and Arab musicians. We believe the demonstrations directed at our musical activities are destructive to our attempts to foster peaceful Israel-Palestinian relations, based on the shared love of music.

We are musicians. We want our audiences of all persuasions, nationalities and ethnicities, to enjoy our music without the type of inconsiderate interruptions of the kind that we, our audiences and the stuff suffered last Monday. Disturbing music lovers in the middle of a concert does not enhance any of the rights of the Palestinians.

Mozartfest chairman Sir David Bell said he was very proud to present the concert, which he said would feature musicians of the highest calibre, according to This Is Bath.

He said Bath Mozartfest and the Jerusalem Quartet welcomed audiences of all persuasions, nationalities and ethnicities and pointed out that two of the musicians were regular member of the conductor Daniel Barenboim’s West-Eastern Divan Orchestra, composed of Israeli, Palestinian and other Arab musicians, in an attempt to foster peaceful relations between the communities.

Sir David added: “Personally, I wholeheartedly endorse Barenboim’s memorable comment that ‘people who listen to each other, both musically and in all other ways can achieve greater things’.  I very much hope that what promises to be a superb concert goes ahead without interruption,” according to This Is Bath.