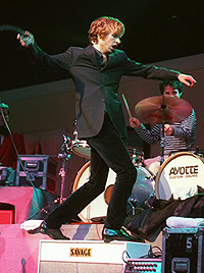 When Beck tours in October, The Flaming Lips will not only be the opening act but will also double as Back's band.
"Everyone I usually play with was busy," Beck told MTV. "I thought instead of trying to form a new band I'd just try to find a band that already existed."

Enter The Flaming Lips, a band Beck has been a fan of for many years. "I like their sense of humor and their creativity," Beck said. "I think it's good for this record ("Sea Change" due September 24), and it's something I wanted to do on this tour."

The shows will feature songs from most of Beck's albums, but many will be reinterpreted and presented in a previously unheard form. "We re-created the albums perfectly for years, so I'm not really interested in doing that," Beck said. "Some of the songs are due for reinventing, and the Flaming Lips will probably bring ideas to it. We'll do whatever works."

"I change the arrangements every night. Sometimes I play things on a harmonium, sometimes we do it on a banjo as a string band. The next tour will be with the Flaming Lips, and on the one after that we'll do something totally different. I love coming off and having done something unique. It keeps everyone awake."