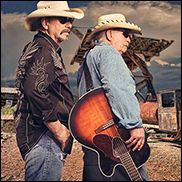 NASHVILLE (CelebrityAccess) – The Bellamy Brothers returned to the U.S. after a sold-out European tour that included packed venues in Denmark, Switzerland, Sweden and Finland. While they did not travel to Brussels, the duo were warned of heightened security and potential threats while overseas.

"The news of the Brussels Airport bombing was released less than an hour before we were due to depart our hotel to the Zurich Airport for our flight to Stockholm via Amsterdam. There was heightened security in the form of armed guards at the check-in counters at the Zurich Airport. By the time we landed in Amsterdam, the news had reached our family and friends in the USA. We all started receiving emails, text and Facebook messages and phone calls from people concerned about our safety. Many of those concerned wanted to know if we would cancel the remainder of the tour and return to the USA. While this was a horrific tragedy, unfortunately it is unrealistic to think a similar attack can't happen in the USA or anywhere else in the world. If we live our lives in fear, the terrorists have succeeded. Our thoughts and prayers are with the people of Brussels and the families of those who lost loved ones," David Bellamy said.


The duo played five sold-out shows during the European leg of their 40th Anniversary Tour. The first stop was in Aalborg, Denmark on March 17 at Kongres & Kulture Center:

“Bellamy Brothers have always been a big success in the Scandinavian countries. They are one of the most popular country artists here with SOLD OUT shows. It's always a pleasure to work with the Bellamy Brothers and their amazing international agent Judy Seale,” said Stig Ulrichsen, CB&Ole B Booking AS.


After Denmark, the Bellamy Brothers embarked to Zurich, Switzerland for three sold-out performances at Albisguetli Schutzenhaus.


“For 32 years, the International Country Music Festival has been held in Zurich, Switzerland and we have worked with the Bellamy Brothers since the 90's. We thank the Bellamy Brothers for their stellar performances and being so gracious,” Show & Music promoter Albi Matter said.


Following their performance at the International Country Music Festival, the duo set sail for the M/S Cinderella Viking Cruise Line between Sweden and Finland.


“This was the first concert we booked on the M/S Cinderella in the country rock genre and to our surprise the ship was sold-out thanks to the Bellamy Brothers. We thank them for coming on board and I’m thankful they didn’t let violence in Brussels affect their tour,”,” Jason Colombick said.


The Bellamy Brothers will be back on the road this spring and summer with dates across the U.S. as well as stops in Germany, Norway and Canada. The second leg of their tour coincides with their new album “40 Years: The Album,” a compilation of past hits and new songs, which also benefits Susan G. Komen by donating $1 of every U.S. iTunes download to fund breast cancer research, education and community outreach programs.


“40 Years: The Album” encompasses more than their four decades in the music business. The project is a compilation of past hits, like “Let Your Love Flow,” ”Redneck Girl” and “If I Said You Have a Beautiful Body (Would You Hold It Against Me)” and 20 new songs.