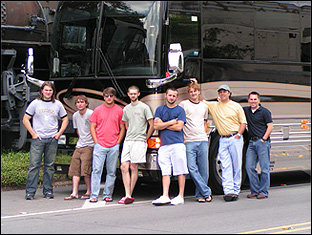 NASHVILLE, TN (CelebrityAccess MediaWire) — Celebrity Coaches out of
Nashville, Tennessee, is giving back to the music community in the best way
they know how: by the busload.

The luxury tour bus company has launched a "Band Wagon Project" to help up and
coming bands make their mark on the music world. The company will provide a
luxury tour coach for thirty days to an unsigned band, which will be used on
a radio concert tour that Celebrity Coaches will help coordinate with their
many friends in the music industry.

The Benjy Davis Project, a group of young and talented college-aged kids from
Baton Rouge, Louisiana, will be the first group driven around the country in
the free luxury busses.

The idea for the complimentary bus came about when a partner in the company,
Dr. Ron Coe, saw the Benjy Davis Project at Jazz Fest in New Orleans. He
thought it would be nice to be able to help new talent get a break in the
industry.

"We didn't know exactly what we could do, but we knew we had the ability to
grant access to million dollar coaches," Michael said. "So we decided to do
what we do best, provide an up and coming band with an Entertainer Coach and
deliver them in style to the music world.

Michael told CelebrityAccess that the idea was generated because a bus
or two of the company's 20-vehicle fleet sits idle on occasion.

"What we get out of it is the experience of dealing with young up and coming
bands and, hopefully, we'll see one of them make it big one day."

Michael said that the reaction from Celebrity Coaches' clientele has been
positive, with many stating that they remember when they had to ride around
with a van and trailer.

Both Michael and Coe were very impressed with Davis and his group, and were
excited to help the band get a break.


Michael estimated that the month long outing is worth a total of $30,000,
with $15,000 going toward the bus, $7,000 for the driver, and $6,500 for
fuel. The band will still be responsible for food and other expenses, but
the company will cover any costs involving the bus.

"At the end of the 30 days, we want to give [future participants] 40 hours in
a recording studio and have sombody there who will help them put together a
CD," said Michael. He also expressed interest in possibly filming the
excursion for a future reality television show.

After the completion of The Benjy Davis Project's free ride, Celebrity
Coaches wants to keep helping young bands in the future.

"We want to continue this on a yearly basis," said Michael, "giving new
promising bands the opportunity to be delivered in style to the music world."

Bands wanting to participate can submit demos to the company and get featured
on their website at www.celebritycoaches.com. Finalists will compete in a
battle of the bands judged by celebrity judges who have been customers of
Celebrity Coaches. –by CelebrityAccess Staff Writers