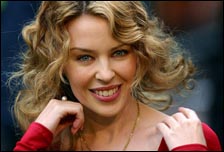 (CelebrityAccess MediaWire) — Frontier Touring Company released a statement denying rumors that an insufficient insurance policy will force superstar Kylie Minogue to personally pay for monetary damages incurred when she was forced to postpone the Australian leg of her worldwide tour due to a breast cancer diagnosis.

The statement read: "The Frontier touring company are not expecting any money in the near future and have not approached Kylie on this matter. Our primary concern has always been, and remains, her health and recovery.

"The majority of fans seem happy to give Kylie the time she needs to recover. It is important to remember that Kylie's tour is only postponed, not cancelled."

Britain's Daily Express ran a report claiming that Minogue would be forced to pay millions of dollars for her delayed Showgirl tour in Australia due to the insurance blunder that would not cover extended periods of ill health.

A source told the paper that "Kylie wasn't insured for this kind of eventuality. She's never had cause to cancel an appearance because of being ill.

"The company which insures her was expected to fork out a huge sum, but it seems that will fall to Kylie herself."

Minogue was forced to postpone her tour when she was diagnosed with breast cancer only a few days before the Australian leg was set to begin. She had surgery in Melbourne and is currently under radiation treatment in Europe.


Frontier told the Australian press that only 5 percent of ticket buyers had requested their money back. –by CelebrityAccess Staff Writers