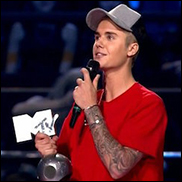 
The pop star won best male, best North American act, best collaboration for Where Are You Now?, with Skrillex and Diplo, biggest fans and best look.


Singer-songwriter Ed Sheeran hosted the ceremony in Milan on Sunday – and took home the prize for best live act.


He also won the best world stage award for his performance at last year`s V Festival.


Accepting his best male award, Bieber said: "It`s been a long couple of years, um, I just feel like this is pretty awesome to be recognized for my music."


He has had a number of legal run-ins, including being arrested last year on suspicion of driving under the influence.


The She`s Kinda Hot singers, who supported One Direction on their Australian tour, thanked their fans via video message.


Ruby Rose, fellow Australian export and star of Orange is the New Black, opened the MTV EMAs alongside Ed Sheeran.


"When we started there was us and MTV and we blazed a trail and we were there for each other," said singer Simon Le Bon as he collected the award.


A surprise winner in the best video category was hip-hop duo Macklemore and Ryan Lewis.


"I had no idea we were going to win an award," said Macklemore.


"We`re not on a major label; we don`t have a big budget. What you guys give to us, we give back to you in the art we make."