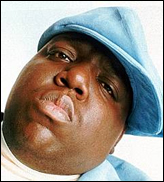 LOS ANGELES (AP) — A long-running federal wrongful death lawsuit against the city of Los Angeles over the fatal shooting of Notorious B.I.G. has been dismissed, although the move is not likely to be the last legal word in the rapper's death.

Bradley C. Gage, an attorney for the rapper's estate, said Tuesday that the dismissal could clear the way for investigators to make arrests in the B.I.G.'s 1997 death. The case was dismissed April 5 after attorneys for the estate and the city agreed that it could be refiled later.

The case included allegations that Los Angeles Police Department officers were involved in the killing of B.I.G., whose real name was Christopher Wallace. Also known as Biggie Smalls, he was 24 and an extremely popular musician when he was gunned down in March 1997 after leaving a late-night party at a Los Angeles museum.

The lawsuit was first filed in 2002. A federal judge declared a mistrial in 2005 after attorneys for Wallace's family discovered the city had withheld a trove of LAPD documents. A judge ordered the city to pay more than $1 million in sanctions.

Gage said he still doesn't have access to some records because of ongoing police and federal investigations.

He said dismissing the case gives authorities time to investigate the killing without worrying whether their agency will be found liable at a trial, Gage said. He also said it ensured that the case wouldn't place blame on someone who might ultimately be exonerated.

He predicted it could take two or three years before the case would be refiled, depending on the criminal investigation.

He declined to say who he thought was responsible for Wallace's death, although he said after years of work on the case, he had some pretty strong suspicions.

"I believe our civil lawsuit was going on the right path," Gage said.

"I think that the family is interested in justice," Gage said. "They want to find the killer or killers and have those people put behind bars. That can help them to put this tragic situation behind them."

Smalls was killed when he was immensely popular and Gage noted that he was likely to earn hundreds of millions of dollars over his lifetime, money that could be recouped in a wrongful death lawsuit. But he added that it was important that the right people and agencies are found liable.

"I think that this is an important case," Gage said. "It's important because it can help to protect society. It's important to show areas where the police department would seem to have failed some of its obligations to its citizens."