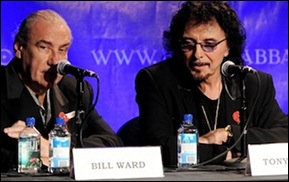 In a post on Ward's website, Ward writes: "I sincerely regret to inform you that after a final effort to participate in the upcoming Sabbath shows a failure to agree has continued. At this time I have to inform you that I won’t be playing with Black Sabbath at the Birmingham gig dated May 19th, 2012, nor will I be playing at Download on June 10th, 2012. Further, I will not be playing at Lollapalooza on August 3, 2012."

In the post, Ward claims that he was forced on "numerous" occasions to "stand up for himself" and that he was finding out about planned performances third hand. He also stated that he was being offered "minimal involvement" in upcoming shows, playing a in a limited capacity with another drummer handling the lion's share of the performance.

The Sabbath reunion has been fraught with setbacks and previously, the band was forced to back out of the majority of dates planned for the tour while Tommy Iommi recieved treatment for lymphoma.

Despite pulling out of the three dates, Ward seemingly left the door open for further negotiation, telling fans that: "I wukk remain with an open mind and a position of willingness to negotiate ‘signable’ terms with Sabbath’s representatives in the future." – CelebrityAccess Staff Writers