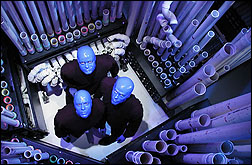 After years of success in theater, Blue Man Group takes their first step into the rock world by joining the Area:2 Festival's main along with Moby, David
Bowie, Busta Rhymes and Ash. Until now, Blue Man Group has always been known for their technically advanced multi-media stage shows. At Area:2, Blue Man Group will be paring down the theatrics and letting their music do all the talking.

Many people may be asking, "Why would Blue Man Group want to go out on the Area:2 tour without any lights and video or any of their other performance art contraptions?" Chris Wink, co-founder of Blue Man Group, explains, "We are currently building a rock concert oriented show that will have all the bells and whistles, but before we add the visual layer, we want to be sure that the music can stand on its own."

Co-founder Phil Stanton adds, "We've performed real short sets in rock settings before, and we really enjoyed it; but we always wished we could do more. The problem was, most of our theatrical material didn't quite seem right at a rock venue. When it came time to work on our second album, we wrote the music with a new rock show in mind."

"We are looking forward to our first chance to play our new songs at Area:2," adds co-founder Matt Goldman. "We go on during the day, so there won't be any fancy lighting or any of our usual visual complexity, but if Blue Man Group is going to make it in the rock world, it will have to be on the strength of the music. It's time to throw away the safety net."

Blue Man Group's second album is scheduled for a winter release on Virgin Records in 2003. The album will explore the sonic possibilities of their invented instruments and will also contain songs featuring guest vocalists. Wink explains, "The Complex is the Blue Man's first big step out of the theatre and into the world at large."

The Blue Man Group sound, first developed for its stage productions in New York, Boston, Chicago and Las Vegas and expanded for Audio, has been absorbed by pop culture. Millions of TV viewers have heard Blue Man's music on commercials for ABC TV's "The Practice," as the soundtrack to various events at the 2000 Olympics, and on CBS TV's coverage of the NCAA Basketball Tournament. Blue Man Group has performed before 60,000 pop music fans at KIIS Radio's Wango Tango event at Dodger Stadium in Los Angeles on a bill that included The Backstreet Boys, Nelly Furtado and Ricky Martin.

Blue Man Group is dedicated to creating and developing exciting and innovative work in a variety of media. Blue Man Group's theatrical productions feature three bald and blue characters who take the audience through a multi-sensory experience that combines theatre, percussive music, art, science and vaudeville into an incomparable form of entertainment.