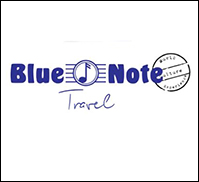 According to the company, the new division aims to offer travel packages to events such as music festivals, and opportunities to travel with recognized artists and personalities in the music industry.

Among the travel destinations the company announced with the launch of the service is Cuba, which recently became a legal destination again for U.S. citizens after an pause of more than 40 years due to an embargo.

"Cuba is widely considered to be one of the hot spots of jazz – an inspiration to the likes of Charlie Parker, Cab Calloway and Dizzy Gillespie and a perennial source of enjoyment to listeners. Notwithstanding political tensions, there continues to be a prevailing affinity between Cuban and American jazz musicians and audiences," says Shabi Samoohi, President of Cultural Island Travel and Direct From Cuba, an organization that represents and arranges concerts and programs for various Cuban musicians in New York City. "This partnership with Blue Note Travel is therefore a natural outgrowth and a re-invigoration of our commitment at Cultural Island Travel to fostering first-rate cultural, musical and artistic exchange between U.S. and Cuban citizens."

Available Blue Note Travel Cuba itineraries include "City & Countryside," which spotlights Havana's urban life with an escape to the countryside (available May 7-11 and July 2-6); "Cuba Past & Present," highlighting Cuba's central countryside, focusing on the country's history with a vintage theme (available June 10-16); "Havana Weekend," designed for busy people who want to full experience Cuba's vibrant capital city on a short schedule (available June 19-22); and "Havana, Santiago & Baracoa," spotlighting visits to three of Cuba's most dynamic cities in one trip experience (dates to be announced). – Staff Writers