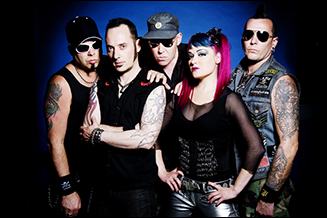 Spawned in Paris, France on February 29, 1984, Kein Mehrheit Für Die Mitleid (which loosely translates into “no pity for the majority”) was initially an industrial-audio concept accompanying art-installations by Erste Hilfe, a group of painters and sculptors, enfant terrible of the mid-80’s German underground art-scene. In the following years, KMFDM began to pioneer the crossover between techno/dance and heavy metal with their signature sound. Relocating to Chicago in 1990, KMFDM was the pride of Wax Trax Records during the label’s peak.

Under the leadership of German-born music founder Sascha K. a/k/a Käpt’n K, the only permanent member throughout the band’s history, KMFDM is still going strong after over three decades of conceptual continuity, regularly recording and releasing albums and frequently touring the world over. Despite the fact that KMFDM consumed the majority of his time and efforts over the years, Käpt’n K still got involved in several side-projects (MDFMK, Excessive Force, Schwein, KGC, OK•ZTEIN•OK) and made a name for himself as a music producer as well as a remixer (Metallica, White Zombie, Front 242 and many more).

Between 1990 and 2007, KMFDM’s headquarters shifted between Chicago, New York and Seattle, since 2008 KMFDM operates out of Hamburg, Germany, again. To quote themselves, “The future belongs to those of us still willing to get our hands dirty”. Living by their D.I.Y. philosophy, KMFDM not only started their own music-publishing entity KMFDM Ent. US (BMI) but was also one of the first bands to ever launch an online merchandise-store, (KMFDM Store) and finally consequently, their own record label, (KMFDM Records).

Though once feared dead after the release of the album ADIOS in 1999, KMFDM re-emerged quickly. After the permanent departure of most of the former collaborators due to internal strife and irreconcilable differences it was time for tabula rasa, a clearing of the deck. New York native Lucia Cifarelli, previously the singer of the band Drill, made her first appearance in the KMFDM-camp during the project MDFMK, later she joined the re-formed KMFDM as front-woman and female lead-singer. As a powerful vocalist and expressionistic songwriter she has redefined KMFDM, as female vocals are no longer relegated to the background.

The Metropolis Records debut ATTAK , recorded in 2001, showed that this newly reinvigorated KMFDM could not be stopped. Since 2002 the lineup has been rounded out with the impressive talents of Andy Selway (the YoYo's, Pig, Schwein, The Dwarves, Spittin' Cobras) on drums and guitarists Jules Hodgson (Lodestar, Pig, Schwein, Spittin' Cobras) & Steve White (Pig, 16 Volt, Deathbed Repentance). What these boys, lovingly known as “the pigs”, brought to the table was made unmistakably clear on the new line-up’s first album WWIII, a brutal thrashing and a sound that once again re-defined KMFDM for years to come.

In the fall of 2014 KMFDM released their latest album OUR TIME WILL COME and this coming July the remix EP SALVATION will see the light of day, just ahead of a planned tour of the U.S.