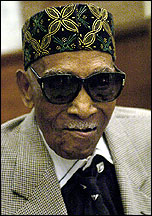 YAZOO CITY, Mississippi (AP) — Blues artist Arnold "Gatemouth" Moore, who gave up the blues and turned to preaching, died Wednesday at Kings Daughters Hospital in Yazoo City after a long illness. He was 90.

At the time of his death, Moore was pastor of the Lintonia A.M.E. Church in Yazoo City.

He was born Arnold Dwight Moore on Nov. 8, 1913, in Topeka, Kan. He claimed he earned the nickname "Gatemouth" because of his loud singing and speaking voice. He graduated from Booker T. Washington High School in Memphis in 1938.

At the age of 16, Moore went to Kansas City, where he sang with the bands of Bennie Moten, Tommy Douglas and Walter Barnes. Moore was one of the few survivors of the infamous "Natchez Rhythm Club Fire" in 1940 in which over 150 died. Other member of his band died in the fire.

In 1941 he returned to Kansas City where he recorded his first record and wrote such songs as "Somebody's Got To Go," "I Ain't Mad at You Pretty Baby" and "Did You Ever Love A Woman?", which was recorded by B.B. King and Rufus Thomas.

He was the first blues singer to sing at Carnegie Hall, according to a resolution recognizing him at the Mississippi Legislature this year.

While performing in Chicago in 1949, he turned to gospel music and was ordained was at the First Church of Deliverance in Chicago with the Rev. Clarence Cobbs as pastor.

Moore served his first church in Chicago and joined WDIA radio station where he was the station's first religious disc jockey. He also worked for a religious station in Birmingham, Ala., returning to Chicago in 1957 for gospel programs on television and radio.

He recorded gospel and blues albums into the 1970s. He recorded his last record in 1977 under as "Great R&B Oldies" on Johnny Otis' Blues Spectrum label. This was a blues release as Gatemouth recut some classics and cut some new ones including a salute to his old stomping grounds on "Beale Street Ain't Beale Street No More."

He was also featured in Martin Scorsese's blues series singing that song as he strolled down the famous street.

In recent years, Moore occasionally played festivals and kept busy with his duties as church pastor.