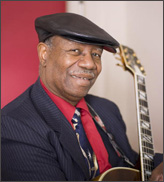 DETROIT (CelebrityAccess MediaWire) — Blue guitarist Johnnie Bassett, well-known session musician and a fixture of the Detroit blues scene died on Aug. 4th at the age of 76 after a battle with liver cancer.

According to the Detroit News, Bassett was known as a go-to player during the heyday of Detroit's active blues scene in the 1950s and '60s and was a member of Fortune Records house band the Blue Notes.

Over the course of his career, Bassett performed with a who's who of bluesman, including John Lee Hooker, Little Willie John, Smokey Robinson and Nolan Strong. He also spent time in Seattle, working with artists such as Jimi Hendrix and Tina Turner.

"This is one of those artists where everything just came together — jazz, soul, blues, R&B," publicist Matt Lee told the Detroit News. "We'll never see his like again."

Later in his career, Bassett stepped to the fore, fronting and singing for the Blues Insurgents, who's 1998 album "Cadillac Blues" was nominated for five W.C. Handy Awards and their 2009 release "he Gentleman is Back" won a Detroit Music Award for 'Outstanding National Small/Independent Label Recording.'

Bassett is survived by his wife, and 4 children as well as a brother and sister. – CelebrityAccess Staff Writers