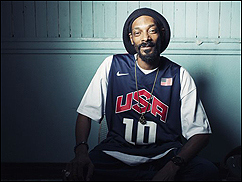 
The rapper was issued the new name by a priest in Jamaica, where the rapper was filming the forthcoming documentary 'Reincarnated'. He has since said he believes himself to be the reincarnation of Bob Marley and will be exploring a reggae sound on his new album, also titled 'Reincarnated'.


The dubby, reggae-by-numbers single 'La La La', performed last night, was the only taste of this new direction. The crowd already seem to be behind the change – some waved banners with "Snoop Lion" written on them.


The rest of the set was hit-packed. Performing to the biggest, most excitable crowd of the festival so far, Snoop Dogg played not just his own best-known songs, but those by other artists featuring him too, such as 50 Cent's 'P.I.M.P.' and Katy Perry's 'California Gurls'. Amusingly, he appeared to forget the words to the chorus of the latter, and asked the audience to help him out instead.


Flanked by a team of hype men, two scantily-clad dancers and someone in full furry costume as the rapper's blunt-toking 'Nasty Dogg' character, Snoop Dogg wore shades with his own name on the lenses and a huge, gleaming knuckle-duster that spelled out the word 'Dogg'.


His set also included crowd-pumping versions of 'Gin And Juice' and 'Who Am I (What's My Name)?'. It climaxed with 'Young, Wild & Free', his collaboration with Wiz Khalifa, which provided a lighters-aloft moment to end the day.


"Snoop Dogg is the reason I came to the festival and he was just brilliant," said fan Maria, from Oslo, Norway. "I like his new song, but I hope he doesn't give up hip hop forever."