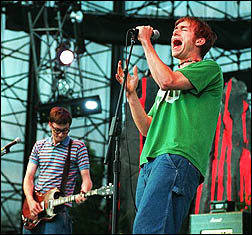 BLUR's manager has said that guitarist GRAHAM COXON is a still a member of Blur- but is not recording with the rest of the band.

Manager Chris Morrison confirmed earlier reports that Graham Coxon has been absent from plans to record in Morocco.

However he stated: "Graham is not in the studio with Blur at the moment.

"He has been in the studio and done some work.

"Blur and Graham are currently contemplating and deciding among themselves what the future arrangements will be."

This contradicts a BBC interview with Blur producer Fatboy Slim who stated that Coxon had left and was not on the album at all.

He told the Evening Session show in Northern Ireland: "Graham has left. They haven't split up – they're two thirds of the way through a really good album."

He added: "When I went in to the studio and he wasn't there, I was secretly quite relieved."

The producer said Coxon had done no work on the new album.

"He didn't turn up for recording. I think that was the final straw."

Rumours of Coxon’s departure reached fever-pitch when he revealed in an interview with NME that he wasn’t aware that the band were travelling to Morocco to record.

Coxon told NME last week: "I don’t think the band went to Morocco, did they? I don’t know – I like staying in London recording. I’m not particularly involved in what’s happening with the Blur record now because they’re doing a lot of other things and I’m just doing my own record really.

"There’s been no bust-ups at all. We’ve known each other too long for bust-ups. I’ve been recording on the Blur album, Blur haven’t split up. I’m in Blur. But in the past few weeks I’ve been very into being at home with my baby, riding motorbikes and getting my album ready for release. A lot of hard work on the Bluralbum is done anyway.

Coxon added: "Pretty much anything goes with what Blur does, it’s very loose. So using people like Norman Cook and The Chemical Brothers, it’s always a quite good experiment. It’s pretty guitar heavy but not really in a rock way."