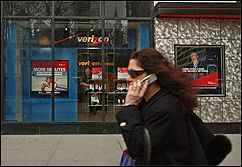 BMI projects that ringbacks will generate approximately $65 million in retail content revenues in 2007. This is BMI’s first market estimate of the long-awaited rollout of the ringback tone market. A ringback tone is a musical work that is performed to the caller when they place a call to a participating mobile subscriber.

BMI’s estimates are based on more than 520 million individual, detailed ringtone transactions analyzed by the organization over the past 12 consecutive quarters. BMI tracks census sales data on more than 325 outlets for the sale of mobile entertainment in the U.S.

“As we forecasted last year, the ringtone market matured in 2006. The slowdown in ringtone growth, however, was partially offset by the first wave of promising U.S. growth in ringback tones,” said BMI Vice President of New Media and Strategic Development, Richard Conlon. “We believe that the ringtone market’s growth has leveled off and the novelty phase has ended. We envision increased revenue opportunity in the streaming sectors of the mobile entertainment market, ranging from ringtones to audiovisual cellular phone TV-style offerings.”

Since entering the market in 2001, BMI has tracked and processed more than 520 million individual ringtone sales by title, artist and gross retail revenues generated. BMI also tracks titles and revenues associated with ringback tone services. BMI’s database of earnings and titles is believed to be the most comprehensive in the industry. BMI uses the data that it collects to distribute public performance royalties on a pro-rated basis to its affiliated songwriters, composers and music publishers. –Bob Grossweiner and Jane Cohen