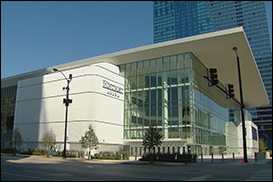 CHICAGO (CelebrityAccess) — Veteran folk rocker and Nobel prize winner Bob Dylan will be on hand to perform the inaugural concert when the brand new Wintrust Arena opens to the public next month.

The arena, which was designed by famed architect Cesar Pelli, can seat 10,000 fans and will serve as home court to DePaul University men’s and women’s basketball games and eventually the WNBA’s Sky home games.

The arena is the latest expansion of Chicago's McCormick Place convention center complex and was built through public financing that included 82.5 million in tax dollars levied by the Metropolitan Pier and Exposition Authority, the public-private partnership that oversees the city's McCormick Place and Navy Pier.

The arena will officially open on October 27th and McCormick officials told Chicago public broadcaster WTTW that more than 50 events have already been booked at the arena, including a benefit show by the legendary rock and R&B group Chicago.

"We're always excited to play in Chicago," said Chicago's Lee Loughnane. "Especially when we can help our alma mater open their new sports facility. We look forward to seeing you all at Wintrust Arena on Nov. 9."