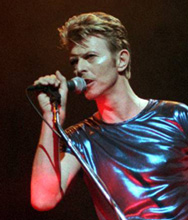 David Bowie, one of the industry's most pioneering and influential musicians, has decided not to re-sign with his record company, Virgin. Rather, he has started his own indie label, ISO.

According to his website, Bowie's management company, RZO, sent a letter to Virgin, stating: ""We respectfully decline your attempts to negotiate a new contract in light of the missed option pick-up of a year ago."

"I've had one too many years of bumping heads with corporate structure," Bowie said. "Many times I've not been in agreement with how things are done and as a writer of some proliferation, frustrated at how slow and lumbering it all is. I've dreamed of embarking on my own set-up for such a long time and now is the perfect opportunity. I want to keep the whole experience at a human level.

To characterize ISO, Bowie said, "I think I would use guitarist Robert Fripp's phrase and describe it as aiming to be 'a small, mobile, intelligent unit'."

ISO was registered as a record label over a year ago, and will be based out of New York and London. It has already signed two new artists, one solo and one band.