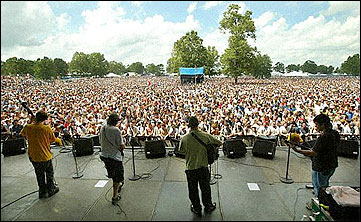 MANCHESTER, TN (CelebrityAccess MediaWire) — As the gates to the most anticipated music festival of the year open today, the cities and towns surrounding Coffee County are bracing for the onslaught of mud, music and merry mayhem that has enveloped the festival for the past three years.

While some in the area have voiced some displeasure over the 80,000 young music fans descending on the area for the weekend festival, most area residents and business have come to accept and welcome the ‘Roo crowd.

Local store owner Gene Gordon told The Tennessean, “It’s just part of the game, you know. You either put up with it or you don’t.”

“Most of them are very nice kids.”

He added, “It’s a good thing for us and for Tennessee. It brings out that we’re not all just country music here.”

Since the debut of the Bonnaroo Music and Arts Festival in 2002, it has grown to be an important part of the nation’s music scene. It has been featured in a wide variety of magazines, including being named among the top 50 events to change the face of rock’n’roll in Rolling Stone.

This year’s festival will be featuring popular acts such as The Dave Matthews Band, Joss Stone, Kings of Leon, The Black Crowes, Jack Johnson, Alison Krauss and Union Station, and Widespread Panic. With a total of eight stages all with overlapping schedules and performances, the diversity of acts is quite impressive.

For instance, around 4:00 on Friday, a patron would be able to catch Krauss’ country soul on the “What Stage,” Jurassic 5’s funky hip hop on the “Which Stage,” John Prine’s classic folk twang in “This Tent,” the Drive-By Trucker’s redneck rock in “That Tent,” that smooth jazz of Madeleine Peyroux in “The Other Tent,” and even the raunchy stand-up comedy of Charlie Murphy in the “Comedy Tent.”

The only negative aspect to such a wide variety of good music? Picking where to be and when.

Festival goer Andrew Richardson told CelebrityAccess that he can’t wait to see some of his favorites, but might have to skip others to do so.

“On Friday night, I’m going to have to choose between the Allman Brothers, Herbie (Hancock), Bela Fleck, and Mike Gordon. I guess it’s either going to depend on how close the tents are, or how fast I can run between songs.”

He admitted that the problem was hardly deterring him from expecting greatness at the show.

As the fans and bands pour into the Bonnaroo Music and Arts Festival grounds in Tennessee, stay tuned for our continuing coverage of artists and events on each day of the festival direct from CelebrityAccess writers and photographers live on site and backstage. –by CelebrityAccess Staff Writers

A team of XM on-air personalities from XM's commercial-free music and other channels, including Jessie Scott of X Country, Joel Haas of XM Comedy, Grant of Squizz and Paul Bachmann of Fred will anchor XM's live Bonnaroo broadcast.
XM is turning over its Music Lab channel, XM 51, to Bonnaroo-related programming for the duration of the festival. Meanwhile June 9, at noon and leading up to the start of this year's live coverage. XM will be playing 24 hours of live music from artists featured at this and past years' Bonnaroo festivals.