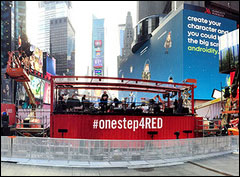 The two replacements took the stage alongside the remaining members of U2, taking turns as front man for the band as they perform at the U2 Minus 1 — Live in New York Tonight. The concert also featured performances by special guests Kanye West and Carrie Underwood.

The concert was to support World Aids Day, which is on December 1st.

Bono had been set to play at benefit concert, but was left with multiple fractured bones and other injuries following a November 15th bicycle accident in New York's Central park and remains under doctors' orders to refrain from performing until fully recuperated from his injuries.

"This year is a World AIDS Day like no other," said Bono, speaking from Dublin. "The world reached a tipping point in the fight against AIDS – more people were newly added to life-saving treatment than were newly infected with the virus. A lot of people are calling it the beginning of the end of AIDS.

"We wouldn’t be at this point without American leadership, people from the left and the right. Today, 13 million people have access to life-saving treatment, up from 300,000 just over ten years ago. Americans don’t know the role they’ve played in this fight. Tonight’s event is to inform them and thank them.” – Staff Writer