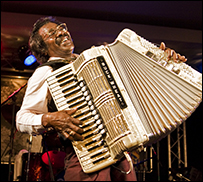 LAFAYETTE, Louisiana (CelebrityAccess) — Stanley ‘Buckwheat’ Dural, better known to his fans as Buckwheat Zydeco, died on Sept. 24th at the age of 68.

According to The Advertiser, Zydeco died at Our Lady of Lourdes Regional Medical Center of complications from lung cancer.

Dural, and his band Ils Sont Partis were one of the few zydeco acts who achieved breakthrough success and has performed numerous high-profile shows that included the New Orleans Jazz & Heritage Fest, The Olympics and presidential inaugurations, as well as in movies such as Fletch Lives and The Big Easy.

Dural, who was best known as an accordionist, started off as an organist, backing artists such as Clarence “Gatemouth” Brown and launching his own funk band Buckwheat & the Hitchhikers before he was invited to join zydeco legend Clifton Chenier’s Red Hot Louisiana Band.

Chenier's influence led Dural to pick up the accordion and he went on to launch his own band Buckwheat Zydeco in 1979.

In a statement, his longtime manager Ted Fox said:

"It is with deep sadness that I have to announce that our great, beloved leader Stanley “Buckwheat” Dural, Jr. has passed away. He died at 1:32 AM Louisiana time, keeping musician’s hours right to the bitter end. I am grieving for my best friend and colleague of more than 30 years. But, as this great road warrior once said: “Life is a tour, and it’s all about how you decide to get where you’re going…I don’t want to ignore the bad things in life, but I want to emphasize the good things.” Buck made everything and everyone he touched better and happier. RIP my dear friend, my brother.

His daughter, Tomorrow Dural, has created a fundraising campaign to help with medical and other expenses." – Staff Writers