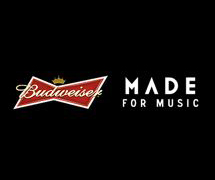 NEW YORK (Hypebot) – Big brands are finding all sorts of way to connect with youth and that elusive thing called cool. But most of all, when they get serious about that mission, they focus on music as the connector. Efforts may involve other elements but music is the key. Budweiser's strengthening its brand with Budweiser Made For Music, offering support for producers and djs in the early stages. American Express is the launch partner for a new project, MADE Music, from a company that specializes in coolness and youth.

Budweiser Made For Music

In Australia Budweiser Made For Music is giving up-and-coming producers tips from the pros, artist feedback and opportunities like a "private listening session with Universal Music Australia’s A&R team" and opening spots on big shows.

They say they'll also be providing info on the "latest gigs, news, club reviews and interviews with local and international DJs."

For musicians a bit further along, Milk Studios is collaborating with "Founding Partner" American Express to launch MADE Music. This appears to be a Milk Studios initiative with more sponsors to follow if needed.

I'm not sure how to describe the group of initiatives that come under MADE, Milk Studios, the Milk Group and related projects such as Milk Made but I guess it's a "we're in touch with the youth and can connect your brand to the hot artist you've never heard of to make you cool to said youth" sort of thing.

Or as Lyor Cohen says:

"They’re at the intersection of fashion, advertising and music…They have so many relationships that they can actually pair the right artist with the right brand and have something authentic."

Which means they could set up the right young artists with some very cool deals.

MADE Music launches tomorrow. Check Milk Made for more October 7.