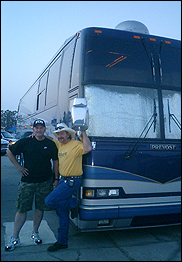 (CelebrityAccess MediaWire) – In the wake of Hurricane Katrina, many entertainment touring coach companies heeded the call for supplies, sending all available buses and resources to the area to help house and transport emergency workers, volunteers, and the media in the area.

So many companies called for touring coaches that the entertainment industry has been faced with a drastic transportation shortage. Many companies found that they could charge far more than normal to prepare and house a media crew as opposed to provide transport for a band, leading to pulled deals and artists left stranded.

Star Coaches, Inc. foresaw the growing problem of artists hitting the last legs of the touring season, and only sent half of their fleet to the Gulf region, fulfilling all prior engagements.

Star’s Vice President Don Neuen spent a week helping out in the region, visiting New Orleans, Baton Rouge, Slidell and Waveland in the first week after the storm. He likened the scenery to “the destruction left after an atomic bomb in the movies. Everything in the area just sat motionless; nothing changing where everyone had left.”

Neuen sent out a message to members of the industry recently to alert them that his full fleet is back in service for the industry, after working for the past 45 days providing generators and shelter for organizations like Fox News, Weston Solutions, CSX Railroad, The Wall Street Journal, Cingular, and the Environmental Protection Agency.

“FEMA alone went after 50 entertainment coaches. Basically what was going on from the last few days of August until just recently, was that we were inundated with calls from clients we’ve never had before,” Neuen told CelebrityAccess. “The whole industry just couldn’t handle it. Supply was suddenly much smaller, with all unused coaches going to the Gulf, while regular demand for the late summer season stayed the same.

“What was disturbing to me, was that many company’s clients who had coaches suddenly didn’t. The clients in the Gulf were just paying more, so the opportunity was there for the companies who wanted to seize it.”

Don and Star Coaches decided against joining the trend of price gouging, but were forced to charge extra for insurance and protection.

“We had to add $25 per day to offset the price of damage, especially in the first few days when they were going in with armed guards on them,” Neuen said. “The stuff that we put underneath for the people of Fox News to survive, like cases of Gatorade or clothes, was worth more to the people in the area than the actual bus.”


Star Coaches kept commitments with clients that had already booked transportation and found themselves covering for some acts that lost buses from other companies.

“Toto had a three-day run scheduled before Katrina hit. The easy thing would have been to cancel, but we honored it,” Neuen said. “We lost money on the gig, knowing that we could have sent it down there for a 45- to 60-days.”

“The most frustrating part was not knowing when the tour in the Gulf was going to end. Having to tell my longtime clients that we couldn’t guarantee them a bus in time for a tour was very hard on us all.”

As hotels are finishing repairs and reopening the in area for the many in need of shelter, buses are slowly returning to company lots, ready to be sent out. Neuen was hopeful that any artists hitting the road for the late season could still be in luck.

Neuen advertised a 2005 Prevost XLII coach, a few Prevost H3-45 coaches and a few 1996 Prevost XL coaches are back from the mission to the Gulf and ready to hit the road, to many of his past clients and those who contacted him during the most crucial times.

As the dire need for buses eases over the next few weeks, artists should be able to once again travel in comfort. –by CelebrityAccess Staff Writers