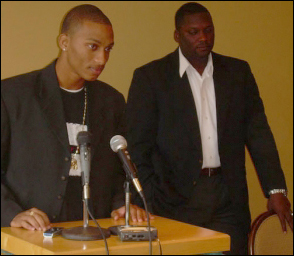 CONCORD, NH (CelebrityAccess MediaWire) — Capital Productions has not renewed its contract with local Hip-Hop star Aaron Parillon. The two year contract between Aaron and Capital Productions ended last month-February, 2009. Word of this decision came from Capital Productions Chairman David D. Archer. Archer disclosed that it had been a pleasure for the group over the past two years to manage Aaron, since the organization had fulfilled its mandate in exposing the young talented artist as well as providing him with management guidance and support. He, however, added that both management and Aaron felt that the time had come to move on.

Under the two year agreement, Capital Productions had been instrumental in helping Aaron to finalize his first official new album ‘The Big Show’. This album includes the BVI number one hit song, 'Home Sweet Home' which according to Aaron, will be released shortly. During the time of his contract, Aaron was also able to play at some major events including the 2007 & 8, BVI Music Festivals, and the BVI Official August Festival Car Shows. Aaron has also launched his webpage and through Capital Productions has been featured both locally and regionally in major magazines and news papers. Aaron also participated in some of the group’s charity works including visits and outing with the Rainbow Children’s home, and donations to schools and the needy.

Aaron has thanked his former managers for their efforts in helping him to realize his dreams and talents and confirmed that both parties were moving on after a mutual and amicable decision. He said he had no regrets in signing up for the two year management contract with Capital Productions, but the time had come for him to branch out. Aaron also thanked his family and fans for staying with him and showing him love and support and encouraged the public to stay tune for his up -coming new Album which should be on the market shortly.–by CelebrityAccess Staff Writers