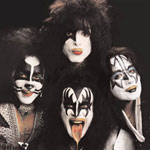 The weekend begins with a tutorial to get players game-ready by tournament host and world renowned poker expert Phil Gordon from Celebrity Poker Showdown, followed by a private "meet and greet" session with Simmons, Navarro and Cantrell. After the tournament, the winners will attend an exclusive after-party in the infamous Real World Suite at the Palms. The 2,900 square-foot, three-bedroom suite has become the most sought after high-roller suite in town.

Winners will be chosen from registrations at the tournament's official Web site — www.vegasrockstarpoker.com and from winners of radio promotions in New York, Chicago, Houston, Phoenix, Los Angeles and San Francisco. The sweepstakes began July 5 and continues through August 15. The top prize is $10,000.

New sponsors for this year's event include Albertson's and Michelob Amber Bock which will run sweepstakes for consumers to play in the tournament and enjoy the once in a lifetime interaction with the participating Rock Stars.

"This event is a natural fit for Las Vegas. It's no wonder last year's Vegas Rock Star Poker was such a huge success. We are looking forward to another exciting and entertaining event here in Las Vegas," said Terry Jicinsky, senior vice president, marketing, LVCVA.

"The first Vegas Rock Star Poker tournament delivered exceptional excitement and results for Vegas," said Bruce Eskowitz, president of Clear Channel Entertainment Properties. "We look forward to the return of this year's highly anticipated event with not only a superb artist combination of Gene Simmons, Dave Navarro and Jerry Cantrell, but we're further legitimizing the reputation of this event with the inclusion of renowned poker expert Phil Gordon." –Bob Grossweiner and Jane Cohen