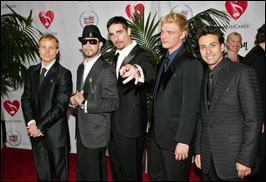 (CelebrityAccess MediaWire)– Through an exclusive agreement with AOL Music, Clear Channel Music Group (CCMG) will offer fans, who buy two reserved tickets to the Backstreet Boys summer tour, two free lawn tickets or mezzanine seats for shows that do not have lawn seats to the same show. The limited-time offer, made possible through a first-of-its-kind deal between Clear Channel Music Group and a major touring artist, runs from June 10-24. Tickets will be available on AOL one week before anywhere else and, while general tickets for the tour go on sale June 17, the buy-two-get-two-free offer will continue to be available for an additional week exclusively via AOL.

Backstreet Boys, who are AOL Music's Artist of the Month for June, will kick off their summer tour, which is also presented by AOLMusic.com, on July 22 in West Palm Beach, FL. and wind down on September 2 in Portland, OR.

"We're thrilled to be collaborating with Clear Channel Music Group and AOL with this fantastic promotion that's all about giving back to our fans who have always been loyal to us," said the Backstreet Boys. "It's especially exciting for the band with the release of our new album 'Never Gone' to have the opportunity to once again perform for our fans across America."

"We commend the Backstreet Boys in having the foresight to reward their fans," said Faisel Durrani, executive vice president of Marketing at Clear Channel Music Group. "AOL is a proven media partner for artists today in reaching a large number of music consumers online."